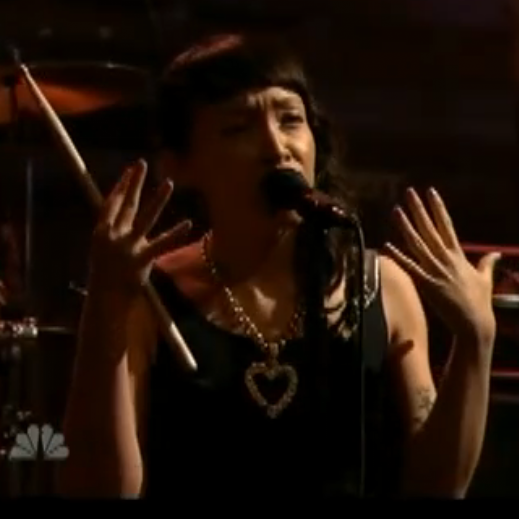 South by Southwest is easily one of the most exciting weeks of the year for both nerds and musicians alike, but it can be exhausting. Just ask the CoS staff who braved the throngs and throngs of people (plus a riot) to bring you our fantastic coverage of the festival. One might thing that a band would take a few days off after playing multiple gigs at the shindig, but Swedish electro-poppers Little Dragon are obviously making the most of the time they’re spending on American shores.

Last night found them making their television debut on Late Night with Jimmy Fallon, and the grueling week in Austin seems to have left them feeling a little languid. They were pimping the title from their upcoming LP – Ritual Union – and while the performance was bouncy, both band and audience members seemed to be content with just bobbing along to the beat. Keeping things interesting, frontwoman Yukimi Nagano mysteriously waved a lone drumstick like a baton before finally using it to delicately tap on a plate of glass. The band doesn’t have any U.S. shows scheduled, so your best chance of seeing them live without having to buy a plane ticket is streaming  (via The Audio Perv) above.