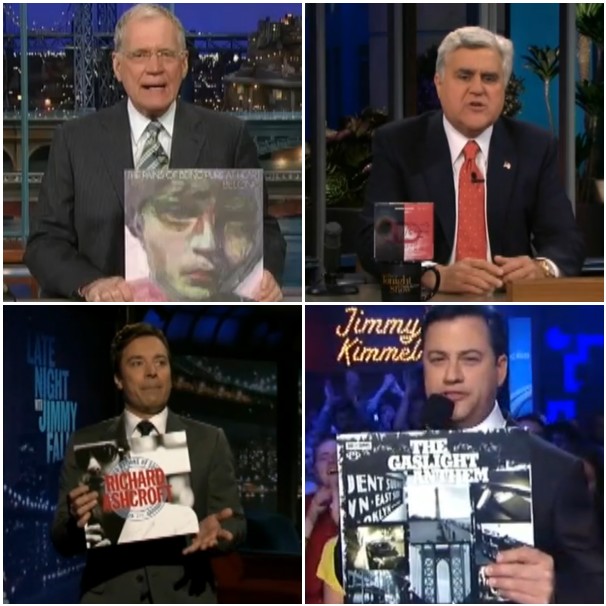 Just like the “super moon” last week, last night was a rare superfecta of late night performances. The Pains Of Being Pure At Heart, Duran Duran, Richard Ashcroft, and The Gaslight Anthem showed their new colors on their junkets last night, highlighting songs from their respective new releases.

It started off with The Pains of Being Pure At Heart attacking their new single “Heart in your Heartbreak” on Letterman. The lo-fi shoe-gaze Brooklyn outfit have filled out their sound and disposed of any flotsam for a sleek, aerodynamic rock song. It’s almost a little too delicious at times, but when they kick it at the bridge, it’s hard to not blame these kids for wanting to get out of the garage and add some fidelity to their pure pop noise. Check out the clip above; pick up the band’s new album Belong March 29th via Slumberland.

Elsewhere on the dial, Duran Duran played the title track from All You Need Is Now on Leno, The Verve’s Richard Ashcroft showcased his latest studio album, United Nation of Sound, with a performance of “Are You Ready?” on Fallon, and The Gaslight Anthem offered two American Slang tracks, “Bring It On” and “The Backseat”, on Kimmel. All videos are posted below and come courtesy of The Audio Perv.

Duran Duran – “All Your Need Is Now”

Richard Ashcroft – “Are You Ready?”

The Gaslight Anthem – “Bring It On”

The Gaslight Anthem – “The Backseat”