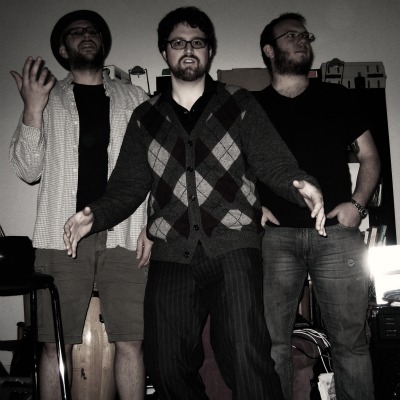 “This is a time when everybody has to survive, so it connects with people,” Early Ape frontman Nate Rylan tells me while discussing where his band’s name comes from. It’s a pretty simple name in a time when bands with names like New Hearts for this Youth Movement prosper and thrive. Early Ape. It’s basic, it’s kind of humane, and Rylan is right…we can connect with it. “We don’t need to have 13 people in a band to play music people can connect with, Rylan says. “We want to be minimalists; we can get things done quickly. We should just cut it live, do some overdubs, and put it out.” Clearly, like men being apes, and rock and roll being raw, Early Ape is pretty old-school.

The band hails from a city in Pennsylvania that the modern public believes is always sunny. And so far their career has certainly seen some nice light. Early Ape have put out two EPs (self-titled and Science Colony), have a full-length LP coming out this summer, and have even gotten a chance to work with songster Eric Bazilian. They’ve played a decent amount of shows all over the New York City area (“We get the best crowds in Brooklyn.”), as well as Philly, and they continue to do mini-tours around the east coast. That’s a much bigger resume than a majority of other local acts one might read about.

Early Ape’s songs pay homage to a time when rock was rock, a guitar was a guitar, and your garage was a musical Mecca. “We’re here in the vein of Nirvana,” Rylan explains. “We’re not trying to be self-destructive, but we want to show people that three or four guys can get onstage and just destroy it.” This is a concept that gets lost a lot in modern music. When you think of the bands that are popular and selling loads of albums (Radiohead, Arcade Fire, LCD Soundsystem, Phoenix, whatever), it’s no longer about bare-knuckles, sweaty, in-your-garage rock and roll. Bands now sound like what HAL 9000 would want to play as he careens through space. While Early Ape does use a synthesizer to add a bit of dimension to their tracks, they come off more like a Reggie and the Full Effect, or early Weezer recordings. “This is what we play. This is what it sounds like,” Rylan explains.

To create these songs, the band turns to a wide array of influences. Bassist Adam Winokur expresses a deep admiration for Nick Lowe, while drummer Joe Baldacci likes “crazy glitched-out electronic music.” “But none of that trickles down to the band,” he adds. He goes on to talk about The Police and The Flaming Lips. Rylan, however, remains totally rock and roll, citing Motorhead, AC/DC, anything with Dave Grohl, and Queens of the Stone Age. And it’s all there within the music as well. “Human Zoo Master” definitely captures a bit of the Lips feel, keeping the instrumentation kind of goofy but also a bit space-age. “Radio” is a total homage to early-90s indie rock: the simplistic synth riff, the crunchy guitars, and the way Rylan playfully sings, “I got a radiooooo.” It’s a total blast from the past. Their track “Heal” would have easily been a college radio success two decades ago. And listen to the driving track “Golden Age”, which contains a keyboard riff that sounds like your Nintendo character just lost a life.

What’s great about this music is that it’s just plain fun. There isn’t a ton of digesting to do here. You don’t have to sit there and listen for 20 instruments layered in one giant audio salad. “We only got four people,” Rylan says, “so we can get things done quickly. I write the lyrics and some general arrangements, but we arrange it all together.” Early Ape’s simplistic approach definitely has a place in modern music, and hopefully this will continue with their next, as yet untitled effort. The band is thinking of calling it Lifestyles. “Like the condoms”, Caldacci adds.

Rylan asks me, “What do you think we should call it?” My first idea is overtly ridiculous, because I never get asked this question. (I tell him, “Independent Thought Alarm Zombie Crusade”.) But then I suggest, Fuck. “Well, it’s a useful word,” Rylan says. It is indeed a useful word…it’s about survival.

Want to be the next up and coming artist featured on Consequence of Sound? Submit your music exclusively through Sonicbids.