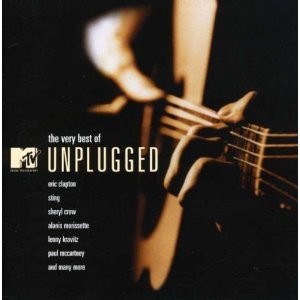 People know this, but they don’t necessarily remember this: MTV used to air music. Not 20-second snippets of the new Katy Perry jam before a 16-hour Jersey Shore marathon, but videos, documentaries, concerts, and more. If there was one place you were going to get your music fix on television, MTV was where you’d go. Everything they aired was original, since there was no real competition– at the time, anyway– and one show that would always appear just when you thought it was time they do another one was MTV Unplugged. This show’s premise remained simple. Producers would take some of the biggest names in rock/pop/hip-hop and see what happened when they cut the power, the amps, the beats, and the stadiums. Instead, they would supply them with acoustic instruments in an intimate setting and have them perform their biggest hits.

The now-classic program first aired on November 26, 1989, but the idea for the show dates back to about a decade prior. A benefit concert known as The Secret Policeman’s Ball in June ’79 featured a performance from Pete Townshend, where he performed “Pinball Wizard” and “Won’t Get Fooled Again” acoustically. This had been a groundbreaking performance, because it was very rare to hear someone play one of their biggest songs in such a stripped-down interpretation. Two years later, a follow-up benefit known as The Secret Policeman’s Other Ball featured Phil Collins and Sting also doing acoustic performances. These sessions would prove to be the inspiration for the show Unplugged, created by producers Jim Burns and Robert Small in the late 80’s.

You can still catch new Unplugged sessions on the Palladia network, and it’s still entertaining to see artists take away the big production that albums have now and just play the songs the way they were probably written. However, unlike today’s performances, there was a certain vibe you would get from watching an Unplugged premiere. These were the biggest names in music, and what they were doing had not been done before. It was exciting to watch what worked, what didn’t, and the odd things that would occur at a small, live performance.

Once the first season finished, acts were lining up to take part in the special concert series. This was an opportunity for artists and bands to shed new light on some of their biggest hits, and in some cases, make themselves relevant once again. Soon enough, Unplugged spawned a list of participants who are some of the best known acts in the business. Aerosmith, Paul McCartney, Sting, Elvis Costello, The Cure, and many more, all played that intimate setting, usually in New York City, and this was all within two years of the series debut. An array of Hall of Fame talent saw that this series was something special, and the public was aware of this as well.

In 1991, Unplugged aired the first ever acoustic rap performances on the program, featuring LL Cool J, A Tribe Called Quest, MC Lyte, and De La Soul. Each performed a couple of acoustic tracks and, in doing so, made history. Today, it seems many of the more recent shows are by hip-hop artists performing in front of a live band, most notably 2010’s B.o.B performance.

Perhaps the most memorable moment surfaced in 1993, when Nirvana took center stage. Dave Grohl proclaimed that the band had seen other performances, and they decided they didn’t like them and wanted to do their own thing. The band didn’t play their biggest hits and instead chose some lesser-known tracks in addition to six covers. The best of these was the cover of David Bowie’s “The Man Who Sold the World”. This show was historic, because it was one of the final televised performances by Kurt Cobain, who would die only five months later.

Maybe the oddest moment in the series arrived in 1996 when Oasis performed – mostly because of the backstory. At the day of the performance, the band readied themselves for the show, the crowd had filed into their seats, when, out of nowhere, singer Liam Gallagher pulled out at the last minute, citing a sore throat. This stirred the pot a little, but didn’t prohibit the show from happening as brother Noel Gallagher said that he would take over the singing duties, instead. The show went on as planned, without Liam on stage, but he didn’t leave the building. He sat above the band on a balcony, got drunk, and heckled his bandmates and brother throughout the entire performance. Looking back, it’s amazing the band lasted as long as they did.

With so many varying genres showcased, the show catered to a wide demographic – including those both young and old. For example, on one night you’d see Stone Temple Pilots and the next you’d see Rod Stewart. Both proved worthwhile. The former featured a young, bearded Scott Weiland sitting in what appeared to be a huge throne of sorts, churning out acoustic renditions of “Big Empty” and “Plush”. It’s hard to not be moved by Stewart, either. Between his cover of Van Morrison’s “Have I Told You Lately” and the fact that the performance marked the first time he had reunited with Ronnie Wood, his former Faces bandmate, it was the stuff rock historians dreamt up. For producers, this meant one thing: ca-ching. Because of this, several artists would later release their performances as an album, and they often did very well commercially.

Critically, too. Not only were these albums popular amongst fans, but in the eyes of the Grammy boards, as well. Eric Clapton won album of the year in 1993, while Nirvana took home “Best Alternative Music Album” in the same year. The series propelled to new heights around this time, and one thing that the audience always loved was when the artist would perform a cover. It wasn’t until Mariah Carey’s rendition of the Jackson 5’s “I’ll Be There” in 1992 that this became a staple. The version went to number one on the Billboard Charts and remains one of the more memorable moments in the series.

Say what you will about the station as a whole nowadays, but to date, MTV Unplugged remains a revolutionary and cultural landmark in the music industry. Although, like many things today, it doesn’t carry the weight it once did – although, it’s trying, what with upcoming performances by Lykke Li? – critics and fans can remember those special moments with legendary artists who have now come and gone. Who would have thought you could reach such a wide audience just by unplugging your guitar?