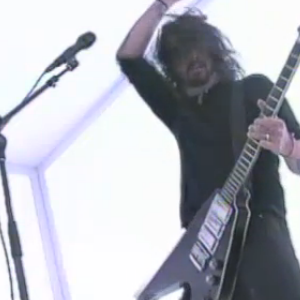 Only a month to go before its release, the Foo Fighters continue to grease up the ol’ hype machine for the band’s seventh LP, Wasting Light. They’ve done secret shows, they’ve put together a documentary, they’ve released a “viral” video (w/ Lemmy, no less), and they’re headlining festivals all summer. Suffice it to say, Dave Grohl is bringing his band back in style – a specific style, though.

Everything about the record, at least thus far, has felt very old-school. Weeks ago, we were hilariously entertained to the group’s low key “backyard” video for “White Limo”, and now, through an exclusive premiere…on MTV…on VHS…in a garage, no less, we have the video for new single, “Rope”. It’s a fairly simple performance clip, all recorded on tape, which gives it this very grainy, authentic feel. The band – Dave Grohl, Chris Shiflett, Nate Mendell, Taylor Hawkins, and, yes, Pat Smear – perform in a white box; although it looks like a mini, traveling Apple Store. Soon enough, as the distortion kicks up and the song’s bleeding heart chorus swings by, colors shift in and out and everything takes on this early ’90s look. Actually, if you recall the band’s video for “I’ll Stick Around”, you might note the similarities. Given what we’ve heard of the record and Grohl’s recent comments on returning to his roots, that’s probably intentional.