A Hawk and a Hacksaw – Cervantine 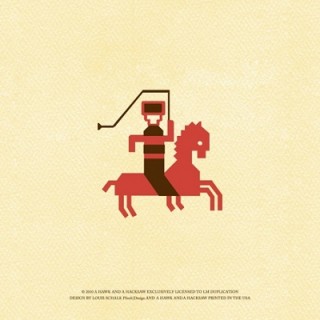 A Hawk and a Hacksaw have made their name by consistently delivering an insular world of Balkan folk with violinist Heather Trost and multi-instrumentalist/former Neutral Milk Hotel drummer Jeremy Barnes producing record after record of solid, traditional, eastern European style melodies for almost 10 years. While their new record, Cervantine, adds folk stylings from other parts of the world, the record retains everything that has made past Hawk and a Hacksaw albums good, if not entirely memorable.

Early in the album, the rattling, rambunctious “Mana Thelo Enan Andra” features a vocal turn from guest Stephanie Hladowski while Greek/Turkish instrumentation floats by. “Espanola Kolo”, on the other hand, features a vaguely Latin horn section bursting out, matching the European accordion, blending folk styles together in an interesting mash. The two musicians can perfect seemingly any traditional instrumentation and sound, turning it into something familiar, grand, and almost theatrical.

This drive for grandeur, for the huge, epic moments, keeps the album fresh despite its inherently old-fashioned songs. The extended intro on the title track revels in its mellow moodiness before the tuba punches in a bassy counter-rhythm to the hand percussion, the horns and strings offering poly-rhythmic, waltzing charm. The music seems to be explored with the ear of a sociologist, intensely intellectual and precise, but the end result comes across purely emotionally, as a scene unfolding. “Lajtha Lassu” is the soundtrack to a film that doesn’t exist, its slow, tear-jerking harmonies unfolding tragically.

While the fad of Balkan influenced indie music (DeVotchka, Beirut, and Gogol Bordello) may not be as dominant now as it was a few years ago, the surviving vestiges carry on the strongest aspects of the tradition. Where Beirut brings the romantic and Gogol Bordello the energetic, A Hawk and a Hacksaw represent the passionate intensity, the epic backing to grand scenes.