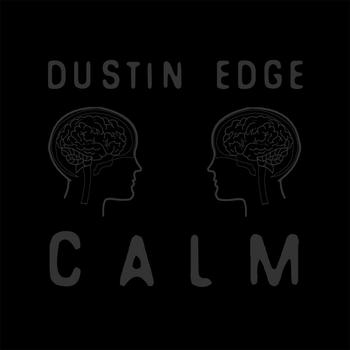 Kentucky-born singer/songwriter Dustin Edge has embarked on a multitude of musical directions in his time, in his earlier years playing in aggressive punk bands, confronting his bluegrass roots on his debut full length, A Forest Through The Trees, and approaching more upbeat, varying methods of stylization on his sophomore effort, By The Numbers. The latter, recorded in Prague, would find him embracing the colorful ambiance of the city, though streams of indie and pop sounds would always remain his main catalysts. Now residing in the loud and energetic New York, Edge returns with essentially the antonym of the Big City sound, taking a change in his musical orientation with an entirely acoustic, folk-filled EP that runs just shy of 14 minutes.

The aptly titled Calm finds Dustin Edge at his most soothing, bearing hints of lo-fi, Americana, and his earlier bluegrass complexions. Whereas folk luminaries like Sam Beam, Sufjan Stevens, or even Bon Iver have all embraced more diverse elements of production in their later works, Calm finds Edge going back in time and putting forth a quiet, Southern sounding homemade recording that could sit well alongside 2002’s The Creek Drank The Cradle. With just five tracks, one of which is wholly instrumental, Calm embraces country swagger (see the sole boisterous cut “Dig Down”): warm, slowly moving picturesque ballads, pretty much anything suitable for sitting on your porch with a glass of bourbon. Whereas on its predecessors Edge has been influenced by the uptempo vocation of New York and Prague, Calm is a testament to his native Kentucky, his words floating through the air like wind, humming subtly along the sweet cascades of his acoustic vigor.

In an interview with Artist Direct, Edge claimed that “New York City can be a beast.” It seems that Calm works hard to overcome this beast, to force the rustle and tussle of N.Y. citizens to take a moment and calm down. Let the folk harmonies of this EP wash over you, and enjoy the little things that life has to offer. For any high-strung or restless New Yorker, Calm is certainly the medication you need.