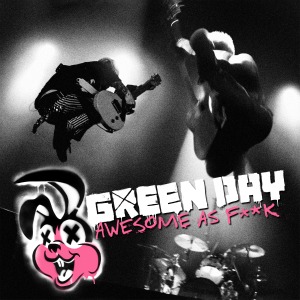 Twenty years ago, the idea of a live Green Day album starting with a raucous crowd cheering and clapping to a piano introduction would have been unimaginable. This year, it is very much a part of our reality. The Bay Area trio whose songs used to run the gamut from slackerhood to masturbation has evolved into a thought-provoking punk-pop outlet whose lyrics now tackle everything from politics to religion, with an occasional nod to the above-mentioned slacker. Heavy-handed at times? Absolutely, but their fan base remains rabid. Those who witnessed the band’s performance at last year’s Lollapalooza can attest to this fact. Hell, they may have been the best headliner of the whole festival. Competing with a reunited Strokes and running-high Arcade Fire, this is quite a feat.

With their latest live album, Awesome as F**k, the enthusiasm is on full display from both the band and the crowds they play to from city to city, country to country. American Idiot and 21st Century Breakdown are given equal play here, and while these will sit well with fans, it is the other half of the record that deserves the credit for the success of this release. Deep cuts are always welcome on live records, and Awesome as F**k does not disappoint. Singer/guitarist Billie Joe Armstrong, bassist Mike Dirnt, and drummer Tre Cool are pretty awesome in this regard.

The live album cuts were culled from the 21st Century Breakdown tour that ran from 2009 to 2010, so it makes perfect sense for the title track to kick things off. The band sounds as tight today as they ever have, neatly re-creating the opener for a live setting, with Armstrong slightly changing around lyrics to encourage group participation (“I never made it as a working class let’s go!”). The picture is painted nicely from an auditory standpoint, and the listener, during musical breaks, can envision the ageless singer marching across the stage with the endurance of his teenage self, playing to small clubs with a different drummer.

If there is a detrimental element preventing the album from becoming a total success, it’s the reminder of how the band still struggles to pen a ballad. The two big offenders here are “21 Guns” and “Wake Me Up When September Ends”. These tracks found success from a commercial standpoint (especially the latter), but they remain stagnant for a band that thrives on energy to reach the heights that they’re capable of. Fortunately, their most popular ballad, “Good Riddance (Time of Your Life)”, is given an extra boost here, thanks to replacing the schmaltzy violin-play of the studio track with rapid guitar-picking courtesy of a solo Armstrong.

The real highlights are found in the record’s middle section. Here lies “Cigarettes and Valentines”, the title track from Green Day’s lost album, seeing its first official release here. It bears more than a passing resemblance to both “Welcome to Paradise” and “Burnout”, but the band didn’t garner the public’s attention for its variety of time signatures. Speaking of “Burnout”, it’s featured here along with Dookie’s “She”. It would have made more sense from a commercial standpoint to have included “Longview” and “Basket Case” as opposed to the Dookie choices they went with, but kudos to the band for going with less obvious track selections.

“This song is my favorite song from Kerplunk, by the way,” Armstrong says while introducing “Who Wrote Holden Caulfield”. Listening to this song and 39/Smooth’s “Going to Pasalacqua” hammers home how long this band’s been together. (They’re Hall of Fame eligible in a few years, by the way.) These songs tend to stick out more in a positive way as opposed to tracks from the more recent albums, largely because they haven’t been seen ad nauseum on MTV or heard on the radio in decades. (Referring to Green Day music by the decade also seems rather bizarre.)

People hardly refer to Insomniac anymore, which is a shame in itself. It’s a fast and furious follow-up to Dookie and fortunately makes an appearance here in the form of the wicked “Geek Stink Breath”. Another song from those sessions, “J.A.R.”, also pops up. This is a woefully underrated era in the band’s existence, overlooked by the commercial breakthrough success of Dookie and the return to relevance of American Idiot. It’s too bad more songs don’t appear from this particular offering.

“I said-a heyyyyyy-o!” appears throughout the release, but don’t be fooled. Armstrong screams out this audience provocation much more during actual shows, which leads to another negative point against the record. It’s without question a live release, but the transitions between songs blend together in a way that makes the listener believe it’s all the same show. Only declarations of love to certain cities and countries prove otherwise. There is something disingenuous about such production, and the band should have gone all-out with a double album featuring one show (as the accompanying DVD demonstrates).

The iTunes edition of the album features an additional three tracks that push this release from good to very. “Letterbomb”, the best of the non-epic American Idiot tracks, is offered up as a bonus along with three other tracks. “Christie Road” features a nice acoustic opening from Armstrong, and to top it off, “Paper Lanterns” and “2,000 Light Years Away” are coupled together as one track to close out the deluxe edition.

As it stands, Awesome as F**k is a good representation of Green Day today. They remain a crowd-pleasing act who, despite maturation, aren’t afraid to kick back and enjoy the spoils of their past. It won’t convert the music fans who don’t like the band, but at this point in their career, nothing will. Green Day is Green Day, and Awesome as F**k is good as f**k.