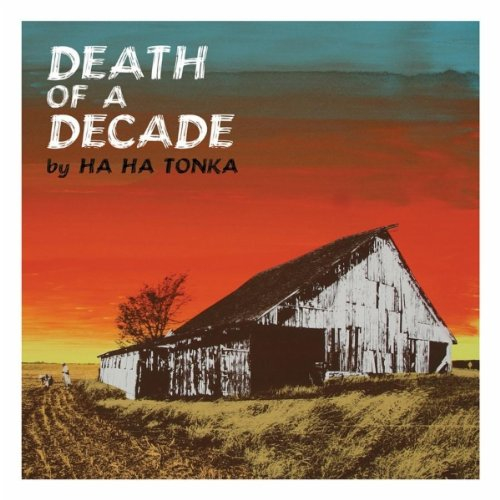 Show-Me State quartet Ha Ha Tonka got their name from a state park close to their hometown. On their third full-length, Death of a Decade, the band’s homage to their roots goes way beyond the superficiality of a name, as their southern/bluegrass infusion tackles encompassing the entirety of the region. The remnants of traditional southern rock amidst pastoral bluegrass, immense vocal harmonies, and the sparkling emphasis on the mandolin truly mirror the feel of central, rural Missouri – perfectly in sync with the old adage ‘write what you know.’ And if vocalist Brian Roberts and company know anything, it’s the Ozarks.

Ha Ha Tonka spends their time on Death of a Decade indulging fully in the country mythos – singing about small town drama, westward expansion, loneliness, manhood, and religion – and the majority of the album packs an authentic, rustic punch. “Usual Suspects” begins with the album soaring mandolin melody accompanying gruff, twangy vocal harmonies. This upbeat tempo is where the band hits their stride, triumphantly combining handclaps and a crescendo-ing titular repetition. The following track “Westward Bound” picks up where “Usual Suspects” left off, as does “Jesusita”, each offering a solid dose of sweetly formed harmonies and previously under-emphasized mandolin.

Unfortunately, this formula grows tired by the end of the album and paired alongside questionable tempo decisions, Death of a Decade ultimately loses too much steam for redemption. “Hide It Well” is a nice acoustic folk song, but it kills the momentum that the first half of the album labored to achieve. From this point on, the album is generic and taxing, best characterized by “Death of a Decade” and its too prolonged repetition of “I was just about to change”. Despite the subpar finish, Death of a Decade presents a hit-and-miss Ha Ha Tonka who’s lows are undoubtedly present, but the highs are admirably high – such as the beautiful vocal harmonies and mandolin melodies.