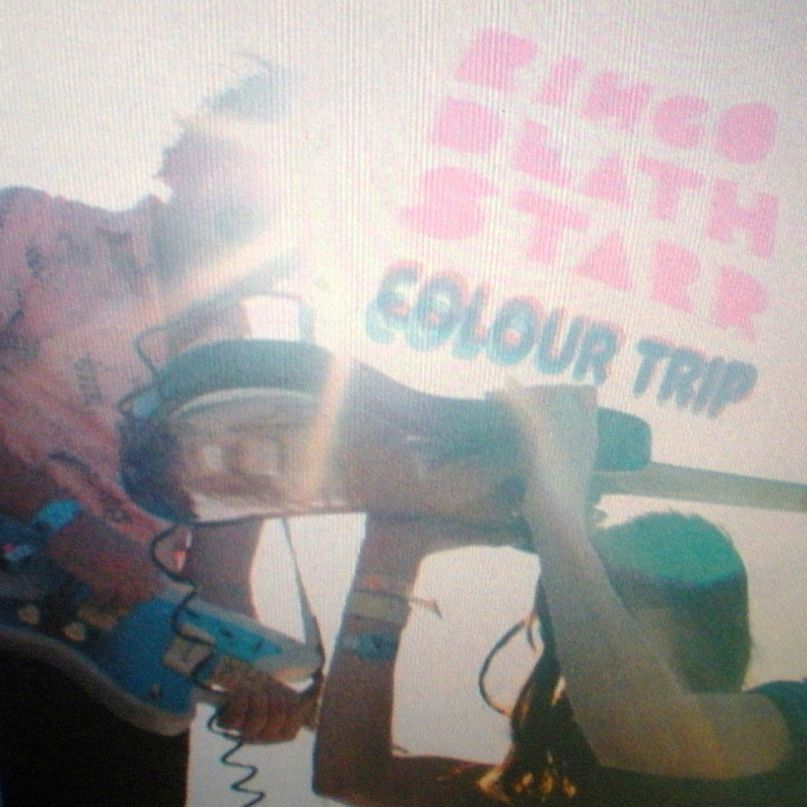 It’s a good thing no one ever told the three Texans behind Ringo Deathstarr that shoegaze’s day in the sun has passed. Elliott Frazier, Daniel Coburn, and Alex Gehring revel in the fuzzy, reverbed noise of My Bloody Valentine, Ride, and The Jesus and Mary Chain. Just as with the classic records produced by those legends of the mid ’80s-early ’90s, there are some conventional melodies and songs buried deep down in the piles of effect-laden guitars. The vocals are typically muddied and the drums thunderous. Deathstarr seem to be taking the same cues that The Pains of Being Pure of Heart are, adding their favorite elements of current dream pop to the whorls of traditional shoegaze. Those little additions, though, remain minimal at best, instead relying on the tropes of shoegaze come and gone.

“Imagine Hearts” opens the disc with some brief, off-kilter, cacophonous noise, before a ready-to-gaze song pushes itself forward. The song’s lurching drums, howling guitars, and loping bass thrum along for a couple of minutes, Gehring lithely murmuring over the mix. The vaguely serene tone of the understandable lyrics and the slinky, ear-shifting bass line betray the aching, uncontrollable guitars, leaving the song a compellingly mixed punch. “Do It Every Time” follows with a rare sort of energy, Frazier taking over vocal duties. The shift from female vocals to male takes a shift in lyrical quality as well, “We’re falling apart again, she took my cardigan” sounding vaguely menacing (or perhaps menaced), rather than merely faraway.

Gehring returns to the fore on “So High”, the dreaminess turned back up. This duality keeps things fresh throughout. Rather than relying on the dreamy quality of Gehring’s voice (which occasionally clashes– both pleasantly and not– with the aggressive, rumbling guitars) or primarily running with Frazier (whose dispassionate, droll vocals can lack intrigue), Deathstarr deftly switches between the two at the perfect moment.

The shimmery Cocteau Twins take on “Two Girls” floats by like a mechanically winged butterfly, all beautiful sharp edges and lush, breezy vocals. The song is the primary aspect of the recording, but the aggressive effects and thriving noise stop this from being another pop record. That said, the noise occasionally sounds a little too reined in; the chaos remains controlled rather than wild. A little more ferocity would have done this record well, particularly on songs like “Kaleidoscope” that lack the kick of their more energetic neighbors.

“Never Drive” hums and crackles with electricity, sauntering by confidently. Alternately, the simple ruckus of “You Don’t Listen” clomps and plods. Despite a seemingly simple sonic palette, no two songs sound identical, differentiating themselves in tone and atmosphere quite easily, rather than structure or instrumentation. While the Gehring-sung tracks stand out more easily, Frazier’s straightforward, genre-friendly vocals can do just as well. Together, though, they make for a consistent record.

It can be said that this is the best recently released shoegaze record, or perhaps that it best recapitulates the classic sounds of a genre largely past. Some might complain that this sort of nostalgia isn’t doing much for modern music, which is true to a degree. But when any band can so perfectly encompass the mass of a niche genre, especially one so beloved and missed, those complaints shouldn’t be too loud. Plus, with a name like that, they should be able to get away with almost anything.