Travis Barker – Give The Drummer Some 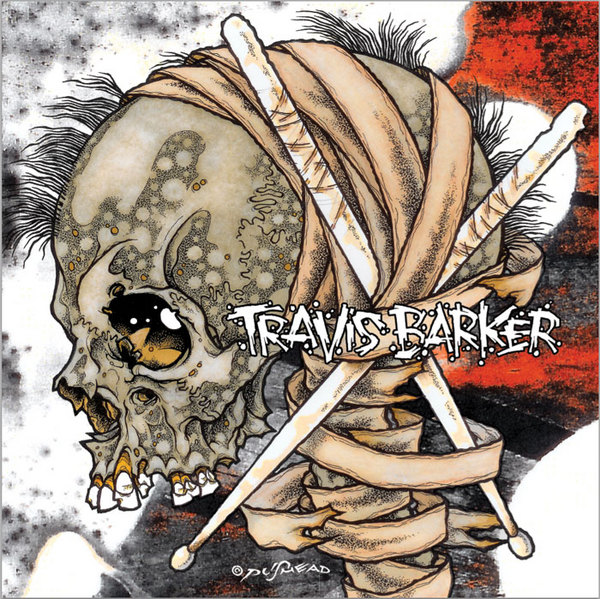 Does anyone recall the big Carlos Santana craze a long while back? When the nine Grammy-winning, guest-heavy Santana atom bomb Supernatural hit radios — complete with collaborations from Rob Thomas, to Dave Matthews, to former House of Pain member Everlast — we officially began partying in 1999. It was infectious, seductive, and everywhere you turned; for better or worse, this was the tip of an iceberg that didn’t dissipate until around the time Mr. Santana dropped a track with Chad Kroeger.

I suppose that, after the Nickelback lead vocalist’s Spider-Man contribution, him and Santana finally came full circle post-2001. During the new millennium’s first decade, pop stars gave the craftsman behind “Black Magic Woman” a reward for his lifetime well-spent in the music business, so when a bevy of rappers and rockers break bread together over Blink-182’s fully-tatted man of few words, Travis Barker, can 2011’s Give The Drummer Some be a repeat of Supernatural’s remarkable success?

In all fairness, there are three primary problems with this release: presentation, kitsch, and an annoying number of “hits” on percussionist puns. Get it? Hits? Ehem, moving on.

The gamut of stars on this release is something you shouldn’t be able to top with a charity case circa “We Are The World”. I mean, come on…the death-defying Tech N9ne inclusion titled “Raw Shit” (which cribs a rather slick sample from Fort Minor’s “In Stereo”), the Tom Morello/RZA/Raekwon killer “Carry It”, the Beanie Sigel & Bun B-featuring throwback to Lil’ Troy’s “Wanna Be A Baller” called “Just Chill”, all of this is worth listening to. Unfortunately, while there are tons of redeemable verses interspersed throughout these selections, there are spots I don’t even see the point of, and half of the album holds about as much weight as “Welcome To My Hood” by DJ Khaled on repeat.

Corey Taylor’s track “On My Own” reminds me of Fred Durst’s misplaced appearance on Snot’s guest-reliant sophomore LP, compared to Cypress Hill blending in on a funk-boosted “Beat Goes On”. Everything bounces all over the place, and it sinks the whole record; every track present amounts to nothing more than a glorified mix-tape. Midway through the effort, Travis Barker — whose remix to Soulja Boy’s breakout hit was admirable and catchy — wears out his welcome as a beat that could be duplicated anywhere. No offense to the man, he has talent, but frankly, anybody could have done this record…he just did it, put a drum track over some rap songs, and called it all his own.

What was the purpose here? Just a fun project? If so, then kudos. If Barker’s goal was to give drummers another horizon to aspire toward, well…

To quote Lil’ Wayne’s lame-ass verse from album opener, “Can A Drummer Get Some?”: “Pull out my dick and just pee on flames.” Yeah, Lil’ Wayne pees on flames to put the fire out kindergarten-style, and after the embers of hype die off, the only thing you leave behind is a drippin’ wet and ridiculously stinkin’ piece of plastic. Probably better off that way, and Barker could simply resign himself to other remix projects.

A whole album of subtly punk drummer-laced singles, compiled for his posterity, and lacking a hefty amount of rhyme skills or dramatic effect. The gimmick of ensemble casting has resulted in a little less It’s A Mad, Mad, Mad, Mad World, and a little more Rat Race rip-off.