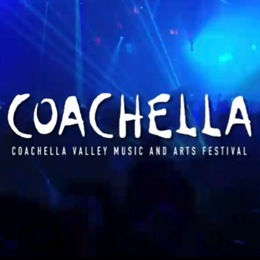 The countdown to Coachella 2011 is just three days, and while attendees are still waiting for set times to be revealed, those unfortunate people without tickets (or who have fake clasps) can begin planning their weekend. As it has been for the last several years, Coachella will be streaming a portion of this year’s festivities on the web. Update: The webcast schedule has been revealed! Among the many scheduled highlights: Kanye West, Arcade Fire, The Strokes, Death From Above 1979, PJ Harvey, The Black Keys, The National, Big Audio Dynamite, Duran Duran, The New Pornographers, The Kills, Empire of the Sun, Lauryn Hill, Omar Rodriguez-Lopez, Erykah Badu, Broken Social Scene, Chromeo, Titus Andronicus, Ratatat, and The Pains of Being Pure at Heart.

The whole thing will be streamed at Coachella’s YouTube channel, and you can check out the schedule below. (All times are PDT.)