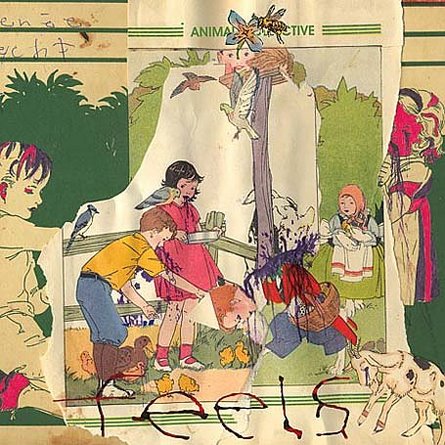 Animal Collective have skyrocketed in terms of success over the last couple of years. The quartet went from an underground sensation of weirdness to one of the most successful acts in modern music in a short period of time. Its no surprise, either, as for years they have been honing their original brand of sampling, fractured composition, bizarre singing, and shrill screaming. It was only a matter of time before the artistic world started to find it acceptable. As they have made a few magnum opuses – best among them possibly 2009’s Merriweather Post Pavilion – they still have one album their long-time fans consistently buzz about (and distribute to friends daily). That album is the bands most tranquil group of tunes, 2005’s Feels.

First getting into Animal Collective was an interesting experience for me. The year was 2007, and my slightly more “cultured” friend from New York (who was also a jerk) insisted on playing a number of their songs on his iTunes. At the time, they freaked me out. I saw them live about a year later (thanks to Coachella), and it prompted me to start delving more into their material. 2004’s Sung Tongs and 2007’s Strawberry Jam came first in my rotation, with 2003’s Here Comes the Indian following due to the recommendation of a friend. After heavy rotation of the first two, 2008’s Water Curses EP and Merriweather Post Pavillion surfaced shortly after that. In the midst of all my love of Animal Collective at that point, Feels had been purchased but yet not heard. This was the case until almost a year after I saw them. A certain friend from college (whose musical opinion I always have highly valued) went off one night on a drunken rant about how Feels contained the best collection of Animal Collective tunes. Thanks for the word of advice, Neil.

As I stated before, Feels is the bands most tranquil work, as well as their most accessible, clocking in at 51 minutes in nine tracks. What I mean by accessible, though, is that it doesnt sound like insects taking over planet Earth, as a number of other tracks do. The rhythm section remains much more low key, and the composition comes from a totally different realm of inspiration. There is a distinct reason for this, as Feels was mostly composed on an out-of-tune piano owned by a friend of Avey Tare. The band collected a number of samples on this out-of-tune piano (for example, see the loping Bees) and then proceeded to make one of their finest albums to date.

Did You See the Words kicks off the effort, and it’s a grand opening for an Animal Collective record. The beginning is very similar to In the Flowers (from Merriweather), yet much more welcoming. Tare whispers, the almost taunting opening line, Have you seen them, the words cut open? The song builds and builds as the rhythm strengthens, and the vocals get more exciting. Grass always felt exactly like the title, but not in the stoner way. To me, it captures the sense of being young, running through the grass as the melody embodies a playful innocence. Tare screams loudly for the chorus, which is off-putting, but the breakdown, with its epic guitar part, has always stood out. The song is so simplistically fantastic and at the same time so perplexingly beautiful.

The album then enters into a peaceful section. Flesh Canoe is one of my favorite songs by the group, with its reverb-filled guitars and peaceful vocals. It conveys the feeling of perfect sleep; Its nice to find new ways to smile, Tare coos over mellow guitars. The Purple Bottle kicks things up briefly, but then the album returns back to the peaceful oddity of Bees. It’s clear that the band was using out-of-tune instruments on this track, as the key of the scratchy strings is rather jolting. At the same time, though, Tares vocals are extremely soothing, and the song almost hypnotizes you.

Banshee Beat keeps things low-key, the same riff sprawling outward while the drums continue to build. The track goes on and on, continuously bringing you up and crashing you down like waves, over eight and a half blissful minutes. The next track, Daffy Duck, is equally as tranquil, complete with unique lyrics. What I need is good advice cooked on plates of ground meat, Tare croons. When we reach the end, though, the instrumentation briefly swells, only to bring things back down to a guitar track that leads into Loch Raven”, which is almost like Animal Collectives version of Kid A with its high-pitched keys, whispered gobbledygook, and low-key drumming. This track is extremely magical, like the “Jennifer Connelly walking through the labyrinth”-sort of magical.

Finally, there is Turn into Something, where the group speeds it all up again for one final jam. The lyrics are chanted out loudly this time; while the rhythm still lies low, the guitar continues to play peaceful loops. The chorus is as catchy as any track on Merriweather, showing Animal Collective had been on their way to greatness even at this point in their career. But youll turn into something, Tare says at the end, you should turn into something.

And the band did just that. Animal Collective has turned themselves into something far greater than they or anyone else could have imagined. Their sampling antics and even stranger influences have taken them to the top of music today, and their body of work for a band of their style and magnitude is commendable. For me, though, it will always come down to Feels. The album is unlike anything they ever made before, and unlike anything they have created since. For me, Feels is the point where Animal Collective was no longer hyped-up bullshit, and it’s also the point where they became one of my favorite bands of my generation.