Festival Review: CoS at Paid Dues 2011 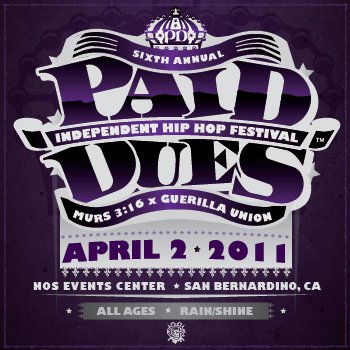 Murs is a Juggalo. Juggalos are weird. But one cant help but admire the mans utter commitment to the game. Back in 2006, Murs put together the first of what would be the annual Paid Dues Independent Hip Hop Festival. And while it has changed venues, sponsors, and even cities, the idea behind the event remains entirely intact: underground.

Paid Dues is not a place for the big time radio darlings. Its not for the rappers who have chosen to reside in The Hamptons. And its certainly not for the rappers pushing almost 500,000 copies of their album in the first week of its release (sorry, Yeezy). Paid Dues is a place reserved for the pioneers of underground and the promising up and comers of the genre; the artists that have stayed true to the spirit of hip hop since the very beginning. Its for those artists who have hustled their entire lives to be heard, never once forgetting their ideals amidst the hubbub of stardom. They arent so worried about the fame and fortune. Theyre a little more concerned about one thing in particular: the message.

So it should come as no surprise that this years installment of Paid Dues was a pure blend of sermon and skill. Whether it was Lil Bs (cocaine induced?) rant on why there should be no such thing as the word race, or Immortal Techniques potent rally for opening the Mexican border, there was no shortage of politically-charged messages. The hearts of these rappers are closer to the streets, which isnt a knock on all the established artists putting out great music, but theres a certain energy underground artists carry that those living the good life cant quite convey as authentically. For the artists at Paid Dues, its not about the amount Yves Saint Laurent they own, its about life. Real life.

And so, its with that in mind that CoS entered the realm of San Bernardino, CA’s Paid Dues.

As the Togo born, D.C.-based young gun Tabi Bonney set up on the stage that would eventually play host to legends such as Dead Prez, Bun B, Mos Def, and Talib Kweli, it was clear that he was in no way intimidated. Paid Dues is a place to prove yourself as an artist and Bonney was obviously up to the challenge. The small crowd that gathered to see the youngster was blown away by his charisma and lyricism, especially on the track Rich Kids. Oh, and the lively chant he started that went Fuck the rich! Fuck the rich! didnt hurt, either.

Dead Prez attracted what was by far the biggest crowd for a non-headliner at the Paid Dues stage. The crowd quadrupled from what it had been for Tabi Bonney, and it was abundantly clear that the poetic, free-spoken words of Dead Prez had reached the ears of many. As stic.man and M-1 took the stage, the crowd knew what a legendary presence they were in. Dead Prezs sound ethical beliefs have been conveyed time and time again via flawless verses, something that was even more powerful live. As they closed their set with a vigorous version of Bigger Than Hip-Hop there wasnt a dis-affectionate heart in attendance.

Underground producer Exile did all the production on Blus 2007 album, Below the Heavens, and also on Fashawns 2009 effort, Boy Meets World. So its only natural that the DJ would spin for this double set of MCs. A more accurate name for the event might have been DJ Exile v. Blu/Fashawn, however, as the two rappers only shared the stage for two songs, but they both played impressive solo sets separately on the MMA cage-fighting style stage. Fashawn peaked with his track Sunny CA for which he employed the rapping styles of Alchemist, who happens to be Eminems current live DJ. Blu peaked during ballad-esque No Better Love. It was tough to decide who was the most impressive between the two MCs and the established producer. Itd be easier to withhold judgment, and enjoy them all for what they were: underground hip-hop up and comers.

Minnesota underground champion P.O.S. is a lot of things, but closed-minded he is not. The creator of the Doomtree collective doesnt limit himself to just rap. Influenced by years of punk and hardcore, P.O.S. entered hip-hop cautiously as a means of expressing himself more fully (he was also more recently a part of the soft rock supergroup Gayngs). Little did he know, not only was he an incredibly gifted rapper, but his influence in punk would help him create a very unique production style, borrowing samples from live punk drums and guitars. As he brought his act to Paid Dues 2011, the sun set over the sizable crowd in San Bernardino. And maybe it was the size of the crowd, or  maybe it was because the night was upon us that P.O.S. decided to go all out, but it’s arguable that this Midwestern legend has never thrown down on-stage with this much energy or spoken with this much charisma. Before announcing that he had a new album on the way, the Minneapolis native played P.O.S. Is Ruining My Life, Let It Rattle, and Purexed.