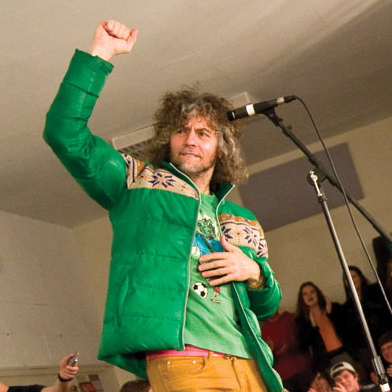 It’s obvious that a band is very strange when hitting college students over the head with drum mallets is one of the more normal things they’ve done in a while. Just ask the Flaming Lips. There are already rumors that they plan to follow up their gummy skull release with a fetus version, and while Wayne Coyne & co. have also announced plans to play a gig at a Los Angeles cemetery, their most recent outing was pretty subdued by their standards.

Observer Today reports that the band spent some time at the State University of New York’s Fredonia campus recording videos and audience clapping for upcoming “live” recordings of at least two tracks from their 1999 masterpiece, The Soft Bulletin. At the helms of the recording was long-time Lips producer Dave Fridmann, who has worked on every Lips record with the exception of Transmissions From The Satellite Heart.

Fridmann, who is the professor of Sound Recording Technology at SUNY, apparently recruited students to sit in on “performances” of “Race for the Prize” and What is the Light?” which found the band playing along to tracks previously recorded at Fridmann’s Tarbox Studios in Cassadaga, N.Y. while camera crews captured the scene on film. Coyne laughed as he explained the staged performances to the students, but attendees were stoked nonetheless. “It was interesting even though it wasn’t an actual show,” Griffin Smith told the Observer, “everyone was still captivated.”

The band’s PR hasn’t responded to inquiries regarding possible release dates for the live recordings and videos, but it’s highly possible that Coyne will take to Twitter to deliver the news anyway.

Hat tip to Psych Explorations of the Future Heart for the link. Photo via Pat DePuy. More photos available here.