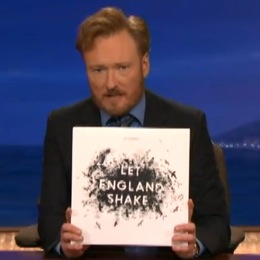 On February 18th, CoS’s own Nick Freed went out on a limb and labeled PJ Harvey‘s newest release Let England Shake the “best album for 2011”– brave considering what else dropped from across the pond on that date. Fans of the multi-faceted singer songwriter resoundingly agreed, quickly snatching up every seat of her ongoing tour.

For U.S. fans that aren’t fortunate enough to witness Harvey’s live show surrounded by a few thousand new best friends, Polly Jean and company stopped by Conan last night to perform “The Last Living Rose” before heading off into the California desert. Like the wedding-esque dress Harvey donned for the performance, fitting given the album was recorded in a 19th century English church, the beauty of “The Last Living Rose” is in its simplicity. Accompanied by a stripped down melody and brief keyed-out trumpet arrangement, Harvey’s sentimental lyrics left those comfortably nestled into bed hanging on to her final quiver.

Watch the performance in the video above, via The Audio Perv.