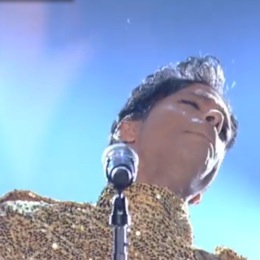 Before last night, Lopez Tonight was perhaps best known for hosting the live hip hop debut of NBA All-Star Ron Artest. But now, Conan’s lead-out can tout the fact that the world’s most famous Prince appeared on his show and played three songs, including two brand new ones. Better yet, the guitar legend set aside his anti-YouTube ways and let Lopez put the performances up on the net.

Above, you can watch Prince play “Beautiful Ones”, off his iconic Purple Rain, and below are clips for the two new songs, titled “Laydown” and “You’re the One for Me”, respectively. As previously reported, the appearance came in support of Prince’s upcoming 21-night residency in Los Angeles, which begins tonight.

Elsewhere last night, The Kills — with Alison Mosshart’s crazy sex hair in tow — took to Conan to play “Satellite”, off the recently released Blood Pressure, and the poptastic Robyn offered live renditions of “Call Your Girlfriend” and “Dancing on My Own” on Kimmel. Both performances can be re-watched below the Prince clips.

Robyn – “Dancing On My Own”