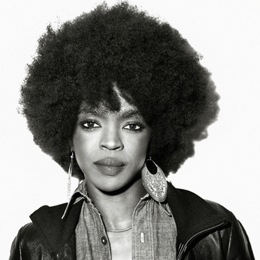 She may not be ready to get back into the studio, but Ms. Lauryn Hill is apparently enjoying her return to the road. She’s been playing smaller venues on her “Moving Target: Extended Intimate Playdate Series” tour for some months now, and has just added 12 more dates to her current schedule.

Half of the dates pad the space between her Coachella appearance this weekend and the New Orleans JazzFest on May 7th. Most of these shows are in Texas, with dates in L.A. and Ft. Collins, Colorado being special Bob Marley and the Wailers tributes, where Ms. Hill will perform some of their classics (the L.A. date is on 4/20, fittingly enough). After JazzFest, she’ll play a few more Cali dates plus Vegas, Seattle, and Eugene, OR before finishing up in Detroit.

In addition, the Twitter account set up for this tour has proven quite fruitful, as an impromptu show last night with comedian Dave Chappelle in Oakland was revealed just hours before it occurred, reports SFWeekly. A repeat performance has been announced for tonight. Good luck getting those tickets, but seats for the rest of her tour can be found at SeatGeek. See her full schedule below.