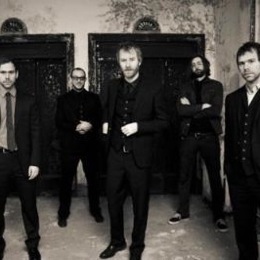 Known as a thought-provoking and emotionally impactful band, The National‘s recent work for the video game Portal 2 might make us think there’s some echoes of slacker-dom mixed in with their sensitive pedigree. Now, though, that sneaking suspicion grows to full-on accusations of wanton stoner behavior as the band prepares to record a Grateful Dead covers album for charity.

In an interview with Spinner during Coachella, bassist Scott Devendorf said the project would be similar to the band’s work on 2009’s Dark Was the Night. That album, curated by The National’s Bryce and Aaron Dessner, saw the inclusion of Bon Iver, Spoon, David Byrne, and Arcade Fire to raise money for the AIDS charity Red Hot.

Devendorf, who is “shadow curating” the LP, said a number acts have already expressed interest. “I think Steve Reich is on it as far as doing some things. He’s actually an old friend of Phil Lesh. They go back to younger days. Then there are newer, folky bands like Fleet Foxes, Bon Iver that are interested.” And as it’s their project, The National are already eying cuts for their own covers, including the frontrunner “Box of Rain” from 1970’s American Beauty.

As for what to expect from a bunch of emotionally aware indie rockers doing material from arguably the world’s most influential jam band, Devendorf noted, “It’s not going to be like jam bands cover the Dead. There are so many cover bands. I think half of the record will be reinterpreting it. We’re also trying to think of unusual [acts]. Crystal Castles would be awesome.”

Expect the project to be released as early as this year, possibly next. As always, stay tuned for more info as it’s announced.