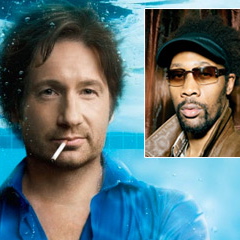 First, let it be known that RZA (born Robert Fitzgerald Diggs) has an IMDB page that seriously rivals or succeeds his AllMusic page. And not just soundtrack work — as a legit actor. Diggs will get a chance to put away his Shaolin technique and focus on his Meisner technique as a reoccurring character on Showtime’s David Duchovny vehicle Californication. TV Line reports that Diggs will be playing a “slightly dangerous hip-hop mogul who Hank (David Duchovny) considers writing a movie for.”

And the tentative name for Diggs’ character is Apocalypse. Yes, Apocalypse.

Here are some highlights from Diggs’ silver screen career, including a sample of his seminal soundtrack for Ghost Dog, and one of the stand out scenes in Coffee and Cigarettes, both directed by Jim Jarmusch. Nothing like the way GZA says “Bill Mary”.