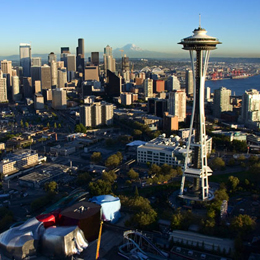 Nostalgia gone wild! Last night in Seattle – where else could this happen? – Dave Grohl, Eddie Vedder, and Pat Smear joined legendary Mike Watt (formerly of The Minutemen) for an impromptu and unrehearsed performance of “Big Train” (via 107.7 The End). Watt, alongside his unit The Missingmen, were billed at the Emerald City’s Triple Door, but audiences were treated to the Pacific Northwest superjam. Apparently, the Foo Fighters were playing a nearby garage show, while Pearl Jam was in town recording (!!!). No doubt there were some priceless opportunities around the venue to capture a few spit takes.

If you recall, the four men have some history together. A lot. Despite performing in bands throughout the early ’90s, all four once toured together in 1995. Watt headlined the bill, with Grohl and Vedder as backing members, though the boy’s respective outfits – Grohl and Smear’s Foo Fighters and Vedder’s Hovercraft – also shared stage time. Needless to say, anyone who decided to hit up Watt’s show last night received quite a bargain. Tickets were only $15 dollars. Wow, right?