Watch: Teaser for The Decemberists' "This Is Why We Fight" (Cluster 1 Premiere) 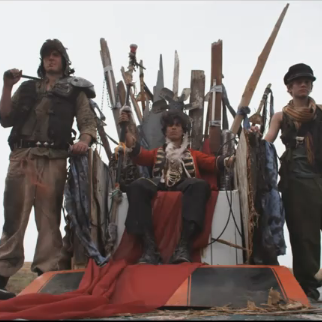 Movies get teasers. Albums get teasers. Hell, songs get teasers. The Decemberists figured why not give a music video a teaser. Cluster 1 has the privilege of premiering that clip just for you.

The video is for the second single, “This Is Why We Fight”, off of their recent chart-topping sixth album, The King Is Dead. It reunites the band with director Aaron Stewart-Ahn, whom they worked with on videos for “16 Military Wives” and “O Valencia”. If those two works are any indication, you can expect something pretty rad, with some solid wit to boot. Oh, and subtitles — there’ll probably be subtitles.

So what do we get in this 15-second teaser clip? In some sort of post-civilized society, an emperor garbed in a British officer’s redcoat with a feathered collar sits atop a throne of scrap-metal and wood. A quarry-side “living room.” Fire. An enraged charge. A walk by a stream. A fixed stare. A feeling of Mad Max done by Peter Pan’s Lost Boys.

Well, at least it’s not one of those trailers that gives it all away. It certainly does the job of whetting the appetite for the full video’s imminent release, though. Check it out over at Cluster 1. Be sure to follow us on Twitter and Facebook, and keep your eyes there for the video’s release.