Watch: Trailer for the Beastie Boys' Fight For Your Right Revisited 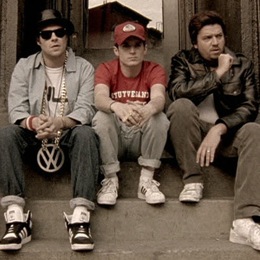 In case the funky scourge that is the first taste off of Hot Sauce Committee Pt. 2 has firmly planted its tentacles on some glorious cerebral cortex-front property, here’s something to free the victims of the Beastie Boys‘ sinister plot to dominate the airwaves all summer long: the Beastie Boys in video form! Courtesy of their official site, the boys haved dropped the trailer for their Sundance-debuting short film Fight For Your Right Revisited. The star-studded feature sees Elijah Wood and Will Ferrell as Ad-Rock, Danny McBride and John C. Reilly both playing MCA, and Seth Rogen and Jack Black tackling Mike D., along with cameos from Stanley Tucci, Susan Sarandon, David Cross, Rainn Wilson, Orlando Bloom, and a literal smorgasbord of Hollywood stars; oh, and the real Beastie Boys show up too. As one might expect from an ensemble cast, shit gets funny real quick. From breakdancing battles to discussions of pie and sledgehammers to entirely necessary destruction of property, it’s sure to take over the time and space “Make Some Noise” is currently occupying.

The film will be packaged in the deluxe edition of Hot Sauce Committee Pt. 2, which is now available for pre-order. A Los Angeles screening is also confirmed for April 29th, so they’ll probably be more than one way to see it. As always, stay tuned for more details.

Update: More Beastie Boys goodness: BBC’s Zane Lowe just dropped Passion Pit’s remix for “Make Some Noise”. The track will serve as the b-side for the “Make Some Noise” single, which arrives April 12th. Stream it below:

Update #2: Speaking on the Kevin and Bean radio show (via @beastieboysnews), Ad-Rock confirmed that the trio has “no tour plans as of now.”