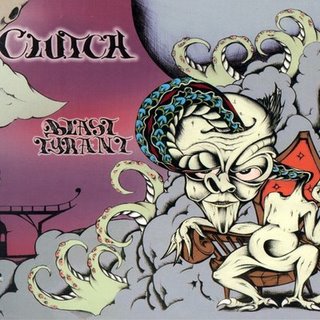 Clutch is one of those bands that will probably be around forever. They have been consistently producing some of best hard rock albums for over 20 years, and they haven’t missed a single step. Their most popular album, 2004’s Blast Tyrant, has now received the reissue treatment with a second disc, called Basket of Eggs, featuring previously unreleased songs and acoustic versions of a few of the album’s main tracks.

Blast Tyrant was the first time that Clutch introduced an acoustic guitar on an album, and before you think that meant they went soft, listen to tracks “The Regulator” and “Ghost” and prepare to get your ass kicked. Clutch manages to use the acoustic seamlessly with heavy drums and deep, crunching electric guitar and never lets up. Lead singer Neil Fallon’s deep voice has a sound that is a combination of Rob Zombie, Ozzy Osborne, and Layne Staley, and it seems to fit perfectly in both guitar mediums. There aren’t too many metal singers who can make that work as well as Fallon–especially when you hear the full acoustic version of “The Regulator” on the bonus disc.

The main album is a classic metal record—as classic as a 2004 album can be, that is. The first track, “Mercury”, smashes head first out of the steel gate with its mythological lyrics. Opening line “Daedalus your child is falling and the labyrinth is calling!” is especially wicked. Lead single “The Mob Goes Wild” holds up well seven years later, even with its references to the Bush II White House and its Bam Margera-directed video.

The second disc isn’t just a collection of toss-offs and bastard children. The unplugged versions are solid and are somehow just as heavy as the main album. The only difference I can see in the unreleased songs is in production value. They’re maybe not as bass-heavy as the main album, but that only makes them sound more like a White Zombie album than anything, especially “Cattle Car”. Basket of Eggs is a perfect sonic companion to Blast Tyrant.

As far as reissues go, this is more than just a dumping ground for super fans and way more than a chance to relive the past like most bands try to do. This reissue is a great way to introduce possible new fans to one of the hardest working, and best, hard rock bands of the last 20 years.