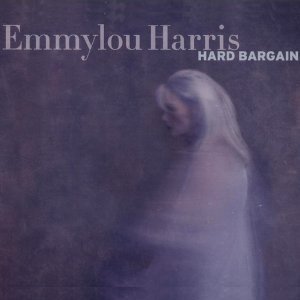 Emmylou Harris works her voice like a well worn but still loved piece of clothing. On Hard Bargain, it’s frequently too nasal though to fit quite as snugly as that old sweater and jeans. It’s still expressive though often muddied. That said, there are pluses. The latest in a long line of studio albums that stretches across 40 years is as impressively tight and proficient as you might expect. Harris, Giles Reaves, and producer Jay Joyce are responsible for all the instrumentation on the record, and as a result, Hard Bargain feels more like a band effort than a solo offering. The polished production remains economical throughout, but overall, it still falls flat.

With an artist of Emmylou Harris’ stature and pedigree, it is difficult to lend too critical an ear over the proceedings without risking disrespect. The lady can furnish an entire apartment with Grammys and simultaneously exit from several halls of fame. Hard Bargain begins on a real high. In the opening song, “The Road”, Harris recalls her musical partner and mentor, Gram Parsons. It lacks the pain and allusive imagery of, say, “Boulder To Birmingham”, but works as a mellower, reflective view on her memories with Parsons. The song also sets the tone for a record; Harris comes to terms with the past and reassesses her life. She draws up some great images – though, not many. The soaring guitar on “The Road” allied to Harris’ breathy yet still powerful vocal is a total dream and makes it a particularly tough act to follow. Sadly, there’s not that much here to hold a candle to it.

Emmylou Harris has rightly earned a reputation as an interpreter of songs and as a songwriter. Most on this offering are her own and not all hit the spot. The swamp rock of “Six White Cadillacs” sounds a bit too familiar for comfort while a post-Katrina “New Orleans” sees Harris attempting to rock out in competition to some frighteningly upfront percussion. She convinces more on the measured reflection of “Lonely Girl” and on “Darlin’ Kate”, a song which fondly remembers her dear friend, Kate McGarrigle. Both are sung from the heart without a whiff of pretension. It’s left to the Jay Joyce-penned closer, “Cross Yourself”, which ends the album in a hopeful, spiritual mood and, along with the Ron Sexsmith written title track, serves as a reminder of the real strength of Emmylou Harris.