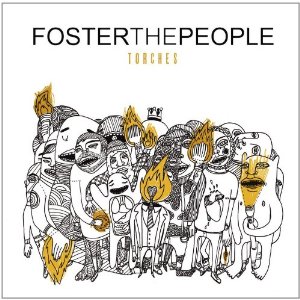 Funky, electronic-driven beats have been the most popular kid at the indie pop dance in recent years with the likes of Passion Pit and Hot Chip serving as current poster children. Tipping their hats to their predecessors, LA’s Foster the People are the latest young guns to bring these familiar, charged rhythms to the forefront on their anticipated debut LP, Torches. They’ve even primed its release with infectious lead single “Pumped Up Kicks”, a tour peppered with sold-out shows, and a Billboard climbing spree.

Having just banded up in 2009, it was Foster the People’s recent SXSW and Coachella appearances that garnered the most attention. Their debut’s heavy blend of throbbing, electronic rock and California-tinged soulful harmonies make for an attention-grabbing listen, but with a few weak points. Torches opens strong with the neon-lit “Helena Beat”, an anthem poised to become a summer standard. “Pumped Up Kicks” has been floating around for months but features enough catchy rhythms and whistling in its 3:59 playtime to stick in listeners’ heads and gloss over the song’s sinister theme. “Call it What You Want” and “Houdini” hearken back to an early ’90s Jamiroquai-esque punchy, piano-driven funk vibe, bolstering the album’s middle. However, lead singer Mark Foster’s falsetto comes off as a shrill yearning cry on “Miss You”, striking as a moment of diversion on Torches’ consistent blend.

Album closer “Warrant” serves as a steady pop send-off, clocking the album in at just over 38 minutes. Though Torches is a ready-made summer album, its staying power is questionable. It’s danceable and addictive, easy to play through a couple of times, but lacks multiple standouts for endurance. At times, the pulsing tempo and colorful instrumentation that make Torches so lively become repetitive. Foster the People’s live shows are sure to be energetic and faced with throngs of dancing co-eds, but the band needs a bit more variety to solidify their electropop soul sound before they’re labeled as wunderkinds of indie dance pop.