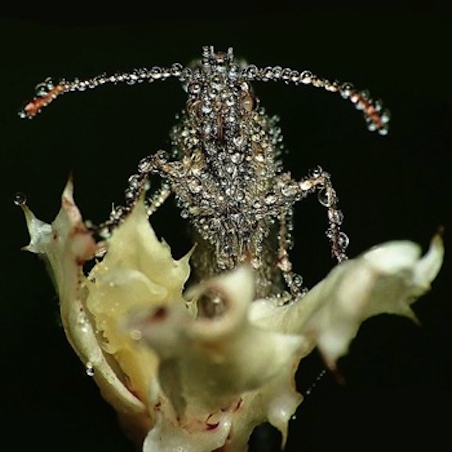 For a group that first established themselves as an art-noise collective and then an abstract groove band, it’s a bit surprising that Manhattan’s Gang Gang Dance has become so intrigued by pop music lately. After the band’s 2005 album God’s Money received solid praise for its insular rhythms and queasy space jams, their follow-up, 2008’s Saint Dymphna, found the band rendering crowd-friendly dance tunes with an avant-garde grinder.

Now, on the quartet’s latest effort, Eye Contact, Gang Gang Dance’s outlook is even more wide open. Throughout the project, they use idiosyncratic grooves to sonically reinvent everything from soft-rock melodies to cheesy rave anthems to throwaway R&B. And while plenty of artists have adopted this aesthetical approach of filtering musical memories through warped lenses, what separates Gang Gang from the pack is they earnestly reconfigure these sounds with funky vigor and experimental swing.

“I can hear everything/It’s everything time,” a muffled male voice announces at the outset of the sprawling, slow-burning 11-minute opener “Glass Jar”. This guy ain’t kidding. On the oblique paeans to synthetic pop “Romance Layers” and “Chinese Layers”, the former track finds Hot Chip’s Alexis Taylor making a cameo on an off-kilter take on neo-soul, and the latter is a concoction that melts together synths lifted from Billy Ocean’s “Caribbean Queen” with pan-global breeze.

On the album’s highlight “Mindkilla”, vocalist Lizzi Bougatsis yelps like a Yoko Ono cover singer, while their principle architect, the keyboardist Brian DeGraw, effortlessly warps trite dance sounds into a cutting-edge banger. Elsewhere, they place psychedelic textures over plastic melodies on “Sacer”, and the cinematic closer “Thru and Thru” sounds like the Swedish electronic duo The Knife gone tribal for the soundtrack of a Bollywood film.

And even though this is the band’s most accessible album yet, casual listeners should still beware. Like most Gang Gang albums, it first comes off as overwrought jumble. But with repeat spins, it gradually morphs into its true nature of earworm irresistibility.