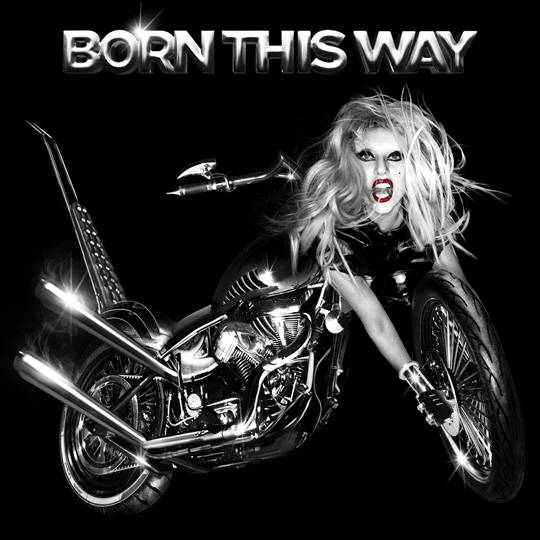 On the heels of the blockbuster successes of her debut album, The Fame, and its follow-up EP, The Fame Monster, Lady Gaga has been heralded as either the savior of pop music and culture, injecting a much-needed spark into what not too long ago was a very tired industry, or the ultimate pop culture hoax, an exploitative con artist hidden behind a thick sheen of pretension and the glimmer of high-budget production. While there seems to be a bit of truth to both sides, Gaga is far from either of them, and it’s regrettable that such debates have superseded Lady Gaga’s musical output for as long as she’s been around. Indeed, for all of the pop star’s eccentricities and attempts at enigma, for all the ridiculous outfits and bizarre interviews, her music has paled in comparison. That is to say, Gaga’s been all talk and very little game. Indeed, that ballsy, wordless vocal hook on “Bad Romance” aside, the majority of her music has all been pretty standard issue club-pop.

Born This Way, then, is Gaga’s attempt to be more than just a pop culture phenomenon, a move toward the upper echelons of pop stardom. Where The Fame and The Fame Monster relied heavily on the strengths of her Swedish pop guru, RedOne –who oversaw production on arguably all of her biggest singles to date and is credited as the key architect of Gaga’s sound–the new record splits its time between a whole host of co-producers (Gaga is proudly credited as co-writer/co-producer on all 14 of Born This Way‘s tracks), while proudly wearing its influences on its sleeve (Brian May and Clarence Clemons, of Queen and Springsteen’s E Street Band respectively, are featured).

But even as Gaga tries her hand at glam (“Marry the Night”), ’80s synth-pop (in the much-discussed “Express Yourself” posturing of lead single “Born This Way”), and hard rock (“Electric Chapel”), most every song on Born This Way is drenched heavily in the same big blasts of club-friendly synths and painfully basic four-on-the-four beats. Even “Americano”, an ill-advised dip into mariachi-pop, quickly devolves into the same sort of busy Eurodisco club banger that, regrettably, makes up most of the album.

There are plenty of bright spots, though. “Judas”, which repurposes the throaty bellows and icy synthesizers of “Bad Romance” in its own chorus, is one of Gaga’s finest moments to date, while the Teutonic rave-synths and absurd techno-babble of “ScheiÃŸe” make for an obvious highlight. “YoÃ¼ and I”, which culminates in a blistering guitar solo from Queen’s Brian May, is about as tender and loving a ballad as you can imagine Gaga writing and is easily Born This Way‘s most enduring track. “Bad Kids”, another of the album’s stronger moments, is a fond, rave-y shoutout to the Little Monsters, as Gaga has christened her most devoted fans.

By the end of it, there’s little doubting Gaga’s sincerity. For all of her schlock and posturing, it’s hard to remember the last time a pop star was this sincere. Even as she gets hit with all manners of criticism, Gaga’s allegiance, to her fanbase and to the persona she’s carefully fashioned for herself, is–if nothing else–very commendable. Everything from the deep-seated hair-metal influence that permeates the album (someone forgot to tell her that garish hair-metal ballads stopped being cool decades ago, or perhaps that’s the point?) to her recurrent support of the LGBT community, who are undoubtedly her core audience, paint Lady Gaga out to be a lot more forthright than she appeared to be at first sight. Even the over-reliance on stale production makes sense in that Gaga knows her fans–and what they want to hear–very, very well. One can only hope that as she continues to build an audience and to pique their interest, she’ll move on to more interesting and innovative fare. For now, though, we’ll have to settle for this Gaga. Gone is the hesitant starlet, obsessed with her own newfound fame on The Fame Monster, and in her stead is a very confident pop star who looks well on her way to a long, exciting career.