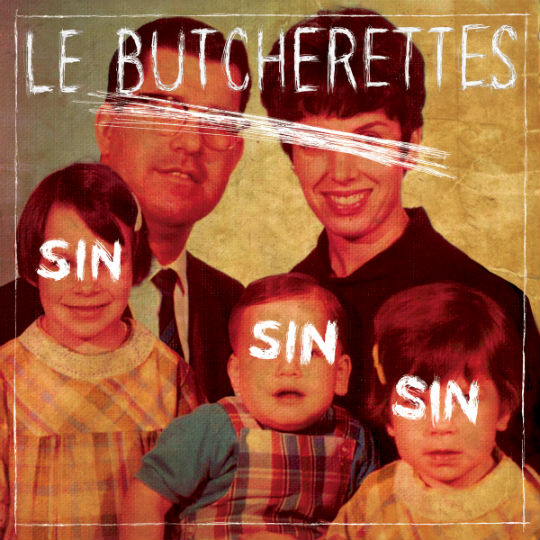 Le Butcherettes have been receiving considerable ecstatic accolades surrounding their raucous live performances, especially since relocating from Guadalajara, Mexico to Los Angeles in 2010. These live shows are notorious for being highly energetic pieces of performance art that feature decapitated pig heads, fake blood, and front-woman Teri Gender Bender spending as much time in the crowd as onstage. These antics have netted them opening slots for The Dead Weather and Yeah Yeah Yeahs, and an upcoming tour with Deftones and Dillinger Escape Plan. Their full length debut is finally here, and it comes courtesy of producer Omar Rodriguez-Lopez of The Mars Volta.

Opener “Tonight” and the following “New York” are deceptively straightforward, with the former featuring an in-your-face, throbbing synth riff and the latter being a simple, but nonetheless powerful piece of garage punk. On the appropriately titled “Bang!”, Le Butcherettes relentlessly assault the listener, rocking off more socks in under two minutes than most bands can hope to accomplish with an entire album. Terri Gender Bender delivers every song on Sin Sin Sin from seemingly a different character and perspective and always with riot grrrl fury.

As immediate as the songs are on Sin Sin Sin, they also hold up remarkably well to repeated listens and represent a musical diversity not often found on punk records. On the organ-driven “Leibniz Language”, Terri Gender Bender showcases a surprisingly tender side as she alternates between spoken word and coos of longing. “The Actress That Ate Rousseau” and Sin Sin Sin finale “Mr. Tolstoi” veer towards the theatrical weirdness of the punk cabaret. While Le Butcherettes may be celebrated for the insanity and spectacle of their live gigs, the thrilling Sin Sin Sin proves they’re far more than a mere gimmick or novelty.