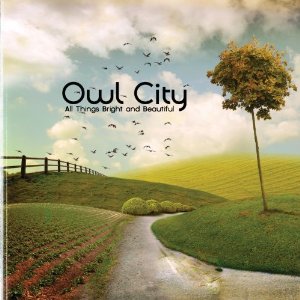 Owl City’s new album, All Things Bright and Beautiful, is somewhat mistitled. The tracks are bright, to be sure, but more so in emo-pop, acid-bright tone than in any sense of actual joy. And the beauty here is (arguably) in the repetition of that tone; if you’re a diehard Owl City fan, then you’re going to love this disc, but for everyone else, there’s not much here.

The 12 tracks here are mostly three to four minutes long, a pretty standard setup on a pretty standard pop album. The one exception is “January 12, 1986”, a 38-second clip of Reagan’s speech after the Challenger disaster, played rather inexplicably in the middle of the album over a quiet track of synth and open-vowel vocals. This probably has some significance for Owl City’s Adam Young (and appears to lead into next track “Galaxies”), but some insight might be helpful. As is, the interlude feels like a distraction (albeit a welcome one).

Everything else plays out as expected, which is to say that there isn’t much innovation here. First single “Alligator Sky” sounds exactly like the other tracks except that it features rapper Shawn Chrystopher, which livens things up considerably. This sonic variety is just a tease, though, and the songs quickly go to back to their ersatz Death Cab, twee-pop sensibilities. There are some cute lyrics (“Reality is a lovely place/but I wouldn’t want to live there,” on “The Real World”), but nothing enduring here. “The Yacht Club” breaks form a bit with a danceable tempo and gorgeous guest vocals by Lights, but waters things down with the lyrics (“She would rather fall in chocolate than fall in love”).

Overall, All Things Bright and Beautiful isn’t a bad album; it’s just not very interesting. There’s no compelling tone, no driving rhythm, no earworm single to draw the listener back, rendering the album a decent listen but of little long term consequence.