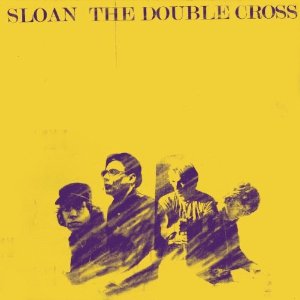 “A less popular Canadian Beatles”, “Jangle-rocky”, and “Underrated vintage pop rock”, are just some of the phrases thrown around when asked to describe the band Sloan. The Canadian quartet have been around for 20 years, and after a brief hiatus, are back on the music scene with their aptly-titled album, The Double Cross (or XX).

Sloan have always been popular in their home country, but failed to find huge success in the States, despite their hit singles “Money City Maniacs” and “If It Feels Good Do It”. The quartet, featuring shaggy-haired bassist Chris Murphy, and guitarist Patrick Pentland (both of which handle lead vocals), shares songwriting duties with drummer Andrew Scott and guitarist Jay Ferguson. The band’s team effort is what helped make the most of their harmonies and melodic classic rock vibe, a sound that helped propel 30 singles, many of which found their way to the top of the Canadian charts.

With The Double Cross, the band manages to sound fresh yet still retains all the homegrown charm that Sloan is known for. The songs are short but sweet and they all flow into each other with just enough definition. The album opens with “Follow the Leader”, a harmonic jingle that wouldn’t be out of place on a 70’s radio, harking back to cleaner times and nostalgia’s rock bands, including a Beatles’-like jaunt at the end into upbeat piano chords. The transition into the next song “The Answer Was You” is flawless and the listener is launched into a moving, upbeat ditty backed by a string section.

Next up is the first single “Unkind”, which just sounds like a single. It’s happy, poppy, and terribly catchy. As simple as the lyrics are (“You can be so kind, sometimes, and you can be unkind, sometimes”) they work here and really create a little earworm in your head. This song is Sloan in a nutshell.

“I’ve Gotta Know” is a fast tempo, punk-ish romp while “Beverly Terrace”, with its muted guitar strings and head-bopping piano chords, is another standout on the album.

The band can’t help but bring comparisons to bands from a bygone era. They head back into Beatles territory with the toe-tapping “Shadow of Love” and “She’s Slowing Down Again”, which features a “bah bah bah bah” background against flower power chords. “Green Gardens, Cold Montreal” is a quiet, finger-picked folk song which would have fit in on Simon and Garfunkel album, and “Traces” has a driving beat on an open highway, Tom Petty kind of feel.

The thing about Sloan though, is that you’ll find yourself questioning whether they sound like other bands, or whether they just sound like… Sloan. In this reviewer’s opinion, they’ve been around long enough that the modern twist on 60’s and 70’s pop rock is thoroughly their thing now. The Double Cross captures the band at their best, with well-written, catchy, and smiley songs that still hold a lot of depth to them, but seem tailor made for summer listening with the top down. Sloan isn’t pushing any boundaries here or experimenting with different music styles, but that’s definitely not a bad thing. We could all use a little rockin’ sunshine.