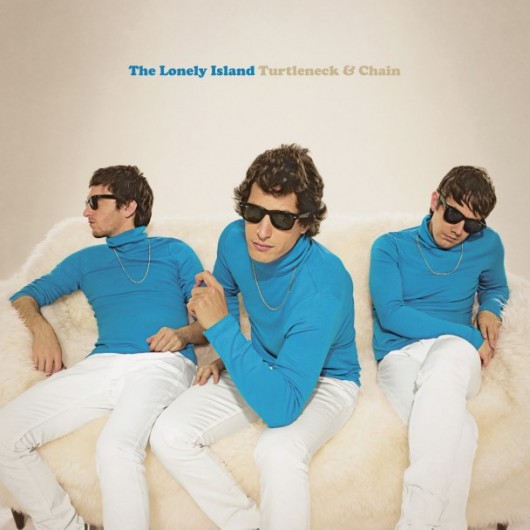 On the surface, it seems a little silly to give a real review to a fake rap album. But The Lonely Island is not your average musical comedy group. They nab huge guest spots and write soaring hooks around songs that are good enough to make you have to decide between singing along and cracking up. Plus, with a Grammy nomination under their belts, they know how important they are to the music world (“We invented this fake rap shit/the world needs us!”). Who are we to argue with them? The dudes are back, and that’s never a bad thing.

Turtleneck & Chain starts out strong – the boys bring the laughs fast and furious for the first four songs. Album opener “We’re Back” is a perfect send-up of any big name rap album intro – complete with Jorma Taccone as the hype man – that juxtaposes the hard rap feel with the very un-rap lyrical content about the their own impotence. Like many of their songs, the next track “Mama” is a one-note joke – but like many others, it’s so funny that it doesn’t matter.

The boys get to Turtleneck & Chain’s major highlight fast, as the Akon-featuring “I Just Had Sex” comes in just under four minutes into the album. In terms of viral internet impact, “I Just Had Sex” is up there with  “Dick in a Box” and “Jizz in My Pants” as one of their mega hits. With over 90 million (and counting) YouTube views, it’s unquestionably the most popular song on the album – only the “Dick in a Box” sequel “Motherlover” even comes somewhat close. Both of these hits work well on the album without their visual counterparts. The sheer joy of “Sex” especially oozes off the record, and it’s always great to hear Justin Timberlake singing again in any capacity (seriously, JT, come back to music), even if it’s all about him loving Andy Samberg’s mother (“Imma be the syrup, she can be my waffle”).

The guest list on this record is impressive – with everyone from Michael Bolton to Nicki Minaj – but some of them work much better than others. Michael Bolton in particular gets put to good use in “Jack Sparrow” – the boys just want to make a sexy club jam, but Bolton is distracted by the Pirates of the Caribbean marathon he just watched and ends up singing about Jack Sparrow instead, much to the chagrin of Samberg and the gang. It’s a great gag that gets better when put to video, but it still plays almost as well in simple audio. On the other hand, Beck apparently showed up on “Attracted to Us”, but it’s easy to miss if you aren’t looking for it, as he’s mostly relegated to being a backup singer. Others still are just there – Snoop Dogg’s guest verse seems like it could have shown up on any Snoop-featuring track. Yes, he’s singing about fluffy turtlenecks and sippin’ on light beer, but seeing as how he’s become a big parody of himself these days, it doesn’t seem too far off anyways.

Just like Incredibad, the non-digital short songs are a mixed bag. Even the most uneven ones have their moments, but only a couple really live up to their SNL-appearing counterparts. The title track is just a wonderfully silly rap song, while “No Homo” is a fantastic parody of the dumb trend of rappers tossing around “no homo” to defend themselves against sounding gay. Predictably, the song ends up with at least one of the dudes coming out of the closet (but, “no homo”!) and then just as the album began, there’s a great take on any-given-album’s outro. The dudes wear some of their influences on their sleeves this time around, as “Rocky” is just a more outrageous (and gory) take on DJ Jazzy Jeff & the Fresh Prince’s “I Think I Can Beat Mike Tyson”, while “Trouble on Dookie Island” is a pitch-perfect Ghostface Killah parody. If it weren’t so ridiculous (and wasn’t about poop), it wouldn’t sound too out of place on FishScale – the dudes never stop rapping for a hook, and it’s got a Scarface audio clip in there for good measure.

In the end, Turtleneck & Chain ends up being about on par with Incredibad – maybe even a bit better, regardless of the flaws. This is not something that is meant to be overly scrutinized. This is a comedy album that just happens to have more catchy songs than your average pop radio album. Yes, the lyrics are sophomoric and vulgar, but why the hell would you want it any other way? Pop it in, sing along, and prepare to laugh your ass off.