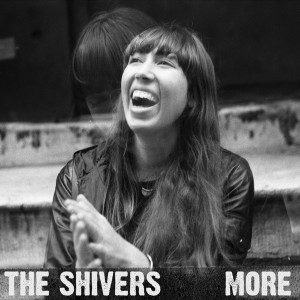 The Shivers‘ More begins with “My Mouth Is for My Life”, a 47-second melancholy, lounge piano snippet, during which it’s hard not to imagine a noir detective unraveling a tragic tale. Maybe, if a piano could talk, it would tell you that making an album is tough and often unrewarding and sometimes doesn’t happen at all.

If it did, it would be telling the tale of The Shivers. Scraping together all the cash they could find, New Yorkers Keith Zarriello and Jo Schornikow spent the early part of 2010 in Manchester, England, laying down the album’s 10 tracks. Their fifth album since Schornikow joined Zarriello in 2004, More coasts through 50’s and 60’s Motown and soul and rock influences in a similar way to The Coral, Elvis Costello, The Black Keys, and The Bees.

The Shivers are at their strongest when at their slowest, and it’s with the Let it Be-esque organ of “Kisses” that More really announces itself. Zarriello gets his best chance to show off the gravel in his voice on that track, and he seems to revel in that whiskey-drinking/cigarette-smoking blues style. “Silent Weapons for Quiet Wars” and “So Long Woman”, acoustic arpeggio-based ballads, follow suit, while “Love Is in the Air” and the title track, a little on the upbeat side, keep the lamentations alive thanks to their generally melancholic chord structures.

It’s with the up-tempo tracks that The Shivers let themselves down. While second track “Irrational Love” begins with a catchy and well-constructed James Jameson-style bass line, it loses its edge when the rest of the song kicks in. “Used to Be” shares this problem, its synth wearing thin a little quicker than you’d want it to.

The Shivers are far better at the melancholic, almost self-deprecating style of the genres that they ape, perhaps reflecting the circumstances surrounding the struggle for creating this album. If “My Mouth Is for My Life” cries out for a voice-over, then this album’s downbeat tracks narrate it, and this duo does it just as well as anybody.

If you’re a fan of genre-nostalgia, then this is certainly for you. If you’re not, give it a go anyway, but be warned that this album won’t lighten your mood.