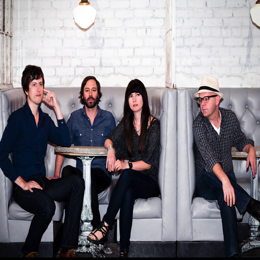 The Austin, TX quartet known as The Wooden Birds, led by former American Analog Set frontman and one-time Broken Social Scene touring member Andrew Kenny, is due to drop their sophomore effort, Two Matchsticks, on June 7th. Ahead of the release, the band is giving away a free downloadable EP, and CoS has your first listen of the bands take on one of Hall and Oates most celebrated tracks.

Back in 1982, Hall & Oates had their longest-running chart-topper with “Maneater”, and almost three decades later, The Wooden Birds have put an indie spin on it. Its a toned-down version sans the heavy electrics of the original, but it flows smoothly along, and Kennys chilly vocals emotionally re-envision Halls bouncy highs. Of course, that familiar sax line is intact, keeping this new take on the song a familiar one.

You can listen to Maneater below by hovering over the widget and clicking on the “playlist”  button, then selecting the second track. Those willing to surrender their email for the three-track EP will also be sent a special discounted pre-order offer for Two Matchsticks (which, by-the-by, features Death Cab for Cuties Ben Gibbard). Check it out using the widget below.