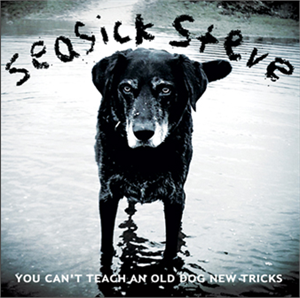 Prior to this year’s South by Southwest, most U.S. music fans were likely unfamiliar with the name Seasick Steve. But after an impressive parking lot performance, one which saw Jack White as an opener of all things, we’ve gotten ourselves more well-versed with the former hobo’s musical outings. Now, a few months after his grand debut with White, Seasick Steve (born Steve Wold) is preparing to release his latest full-length album, You Can’t Teach An Old Dog New Tricks, this June via White’s Third Man Records.

For those still unfamiliar with Seasick Steve, besides from being prone to nausea whilst on aquatic vessels, he’s a bluesman who plays a mean three-string guitar. While he didn’t record his first album until 2004’s Cheap, he’s had experience on working as a producer and engineer, including stints with Modest Mouse on several of their releases. Seasick Steve first rose to increased notoriety after a New Year’s Eve 2006 performance on Jools Holland’s Hootenanny. From there, it’s been festivals across Europe and the UK before landing in the loving graces of Senor White, who also released a Seasick Steve 7″ as part of the label’s Blue Series.

The 12-track effort, his fifth record, was produced by Seasick Steve himself and Henry James Wold (his son). Recorded during fall 2010, the album sports two release dates: on May 31st, the album drops digitally. Then, on June 7th, the vinyl will hit stores.  Along with the release of the record, Seasick Steve will play several European festival dates, including Isle of Wight and Reading & Leeds, this summer. Check out the entire tour schedule, along with the LP’s tracklist, below.