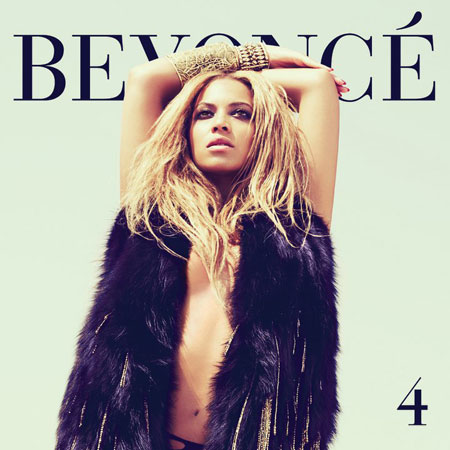 Ladies and gentlemen, I have an announcement to make: Pop music has found its Alpha and Omega. Please ritualistically burn any remaining offerings from Katy Perry, Taylor Swift, Lady Gaga, Ke$ha, and whatever other false idols may be spinning on your iPod. There is only one true warrior-priestess worthy of your pitiful calls of devotion, only one with an album of pure pop excellence that will surely stand above all other female pop records for the remainder of 2011, if not longer, and that album is Beyoncé‘s 4.

Her fourth solo effort, 4 continues the Beyoncé tradition of making amazingly catchy, anthemic records with some of her best songs to date. Yes, even the glory of “Single Ladies (Put a Ring on It)” pales in comparison to the 12 tracks that comprise this LP. Influenced by everything from Fela Kuti Broadway musicals to the stylings of Teena Marie, 4 is a succinct and powerful demonstration of a woman at the top of her game, working with some of the industry’s best writers and producers (including Kanye West, Frank Ocean, The-Dream, Diplo, Babyface, and more). Thanks to all of that influence (and a bit of her own genius), she has created a mesmerizing ensemble of R&B ballads, club bangers, and throwback sensations, all filled to capacity with heaps of heart and straight-up soul.

Her last album, I Am…Sasha Fierce, was jam-packed with hits, including “Radio”, “If I Were a Boy”, and “Sweet Dreams”. But unlike that album, there’s something more substantial, an extra bit of pop oomph that makes these tracks seem less like overly shiny hunks of studio magic and more like solid, content-rich odes to love and life. Case in point: “Best Thing I Never Had” and “Rather Die Young”. The former is the super-powered female call to arms a la “Single Ladies”. It’s got a sort of wit and openness to it, a truly powerful moment of self-realization enhanced by Queen B’s vocal performance as wounded bird turned resilient lioness. “Rather Die Young”, on the flip side of that sentiment, is the most R&B-laden, old-’60s-doo-wop-referencing hit Mrs. HOV has ever spun. Sure, the “I need you more than life itself” thing has been done to death by Beyoncé over her entire career, but here it feels fresh, with a previously unreached level of  funk to it. Even on some of the weaker tracks, like say the girl power anthem “Run the World (Girls)” or the too-saccharine-for-its-own-good “I Miss You”, the album shines.

But the truly dazzling aspect of the record is what it does with minimal production and simplistic lyrics. “Party”, featuring production from Kanye West and a verse from Andre 3000, is as simple as a Beyoncé song gets: a low-key, synth-y beat paired with inspired vocals by Beyoncé and a killer, fluid verse by Mr. Benjamin (including the line “I got a homeboy named Butta and another homeboy, that nigga named Cheese/Fuck wit’ me baby, I make it milk ’til it drip down yo’ knees”).  But as far as demonstrating the power of a stripped-down Beyoncé and how devastating that can be, the winner is “Countdown”. The track, like so many pop offerings, is everywhere on the genre map, but it features a chorus of staggering simplicity and effectiveness: “My baby is a 10/We dressing to the nine/He pick me up at eight/Make me feel so lucky seven/He kiss me in his six/We be making love in five/Still the one I do this four/I’m trying to make a three/From that two/He still the one.” Any way you do that math, it’s a winner.

Between doing more of the same old goodness and boiling everything down to its most essential lethality, Beyoncé also makes room on the album for more grandiose tracks that would sound right at home in Broadway musicals, like the marching band-fueled funk/operatic space ballad “End of Time”. Both of these directions show that in the steel cage match that is modern-day female pop music, the champion from here on out is Beyoncé.