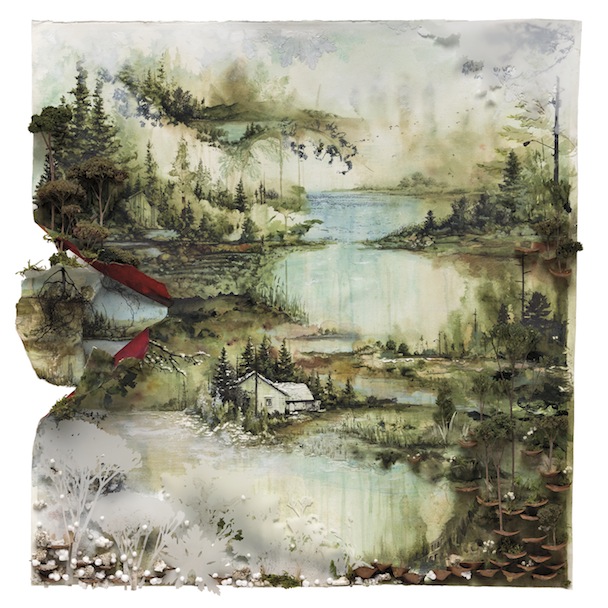 Let’s start out with the negative points first, shall we? Then we’ll slowly work our way into the vast number of positive points there are to be made. That way, by the time you finish reading the review, you’ll have forgotten that I ever said a single ill word of Bon Iver, and you’ll go back to listening to Bon Iver on repeat like you’ve been doing for the past two-three weeks.

But first, a touch of back story: For Emma, Forever Ago is one of the strongest debuts released by any artist in the past five years. In fact, it may very well be the best. The beautiful layering of Justin Vernon’s falsetto, the simplicity of the melodies, and the story behind its conception were all key factors in the album’s rapid climb to massive popularity. Vernon made it virtually impossible not to like it. It was raw, it was earnest, and, most importantly, it centered on themes any human being who doesn’t have a gaping black hole where their heart should be could relate to. It’s already a staple in the indie canon.

All that in mind, Vernon set an incredibly high bar for himself. And as if all that weren’t enough, he then continued to raise that bar higher and higher in what had to have been the busiest off-season in indie folk/rock history. Not only did he tour For Emma relentlessly, but he released the Blood Bank EP to fairly positive results, starred in two collaborations (Volcano Choir and Gayngs) to universal critical acclaim, and, to top it all off, he became Kanye West’s right hand man on Ye’s tour-de-force album My Beautiful Dark Twisted Fantasy.

By this point, it seemed Vernon could do no wrong, which, by extension, meant that his sophomore album would surely be an outright masterpiece. Unfortunately, this isn’t quite the case. And it’s not Vernon’s fault, or anyone else’s for that matter. It was simply the fact that the bar had been set to a height impossible for any musician, even one as capable as Justin Vernon, to reach.

But it’d be utter blasphemy to say he missed the mark by more than just a few tiny inches. Vernon came dangerously close to hitting absolute perfection, but was held back by one crucial element: sincerity. That’s not to say we think Vernon’s a liar. But part of what made Emma so fantastic was how unabashedly candid it was, and that sentiment is not matched on this album.

The scenery on Bon Iver’s previous LP was presented in such an innocent and incorruptible way, it was as if we had been granted the momentary rights to peel back Justin Vernon’s skull and peer in at his every thought and emotion. There was a sense of desperation on Emma that simply isn’t as present on Bon Iver. That selfsame desperation was what appealed to the masses; it struck a chord with everyone.

So, Vernon’s latest installment goes largely without that particular leg to stand on. But that in no way means it’s lacking on the whole. What it’s missing in raw emotion, it makes up for (almost entirely) in sheer musical prowess. Emma was based around one central idea musically and thematically: loss. Bon Iver’s elected to explore a number of ideas this time around, most visibly illustrated by the number of different geographical locations on the tracklist (“Perth”, “Hinnom, TX”, “Calgary”, etc.).

The number of locations listed is almost equivalent to the number of unique soundscapes Vernon and co. have created for this effort. No two tracks sound too similar, which is a good recipe for warranting multiple listens. It’s different shades of Bon Iver for the entirety of the album. The cause behind this particular idea is fairly easy to guess – this album was a group effort. Vernon added band members Mike Noyce, Sean Carey (aka S. Carey), and Matthew McCaughan after recording Emma, and the album is full of his ideas and talents alone. This time around it’s the collective brainchild of the four, plus additional guest artists here and there.

As such, we see such immense variation between tracks, from the nearing post-rock levels of opener “Perth”, to the more familiar acoustic Bon Iver sound of “Holocene”, all the way out to the cheesy-unless-done right sound of “Beth/Rest” that could easily be a cut straight from Bruce Springsteen’s savory cheese-fest of an album, Tunnel of Love.

One would assume that being stretched in so many sonic directions would take away from either musical integrity or cohesiveness, but it does neither. Every track is handled so expertly and with such care that it’s almost as if each track is its own album. There are half a dozen tracks on the album that could be this go-around’s “Skinny Love”. The title could go to the unbelievably catchy “Michicant”, the sprawling “Calgary”, or the billowing piano of “Wash.”, and it wouldn’t change a thing. Each track is done to complete perfection.

And though that might make it sound like the album is a scattered hodgepodge of tracks, we assure you this is not the case. In some inexplicable way, the 10 tracks that comprise Bon Iver are all incredibly interchangeable. Somehow, with all these different locations and all these different soundscapes, the album remains one substantial article of music.

And let’s be honest with one another. The album is a shoo-in for being a timeless great, no matter what we say. Vernon’s got the magic touch. But it’s lacking that original sense of urgency that flowed so freely in and out of For Emma, making it so genuine and so incredibly listenable. Perhaps we were hoping for another For Emma, Forever Ago, and that was our biggest mistake. Because what we got was another beast entirely: a beast almost as beautiful as its predecessor, only in a completely different way, which is, in a manner of speaking, the highest compliment we can pay Bon Iver.