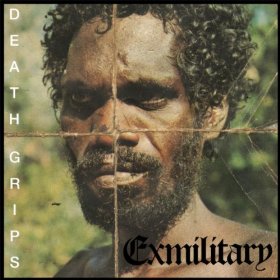 While Tyler, the Creator’s Goblin won more than its fair share of fans, chagrin, and a spot in the Billboard top 200, a retrospective look/listen to the album less than a month after most of the hubbub has died down has Odd Future’s fearless leader looking suspiciously like just another angsty, teenage rabble-rouser. Rather than the paradoxically menacing/endearing figure Bastard painted the 20-year-old producer/rapper to be, his second full-length sounds out of ideas a minute into its third track, and never fully recovers. Despite his noted pride on the collective’s self-contained autonomy, Goblin would’ve benefited highly from some quality control.

Enter Death Grips, a rather amorphous hip-hop project presumably based out of Northern California, and helmed by super-drummer-collaborator Zach Hill. I say presumably because there are little to no details available on the outfit. No word on whether it’s a marketing ruse or not, but nearly everything about them — from the savage choppiness of their music videos, to the Web site’s offering of a free .zip download of Exmilitary above a link to the band’s iTunes (if, as the site itself puts it, “thats your thing”) — points to the fact they that they really, truly, sincerely don’t give a fuck.

While it’s tempting to delve into how refreshing it is to hear an artist emphasize their music above all else in such a no-frills manner as Death Grips do here, you’ll have to excuse me for feeling little aside from true, genuine fear by album’s end. Hill’s noted experimental slant (see his noise work with Omar Rodriguez-Lopez, collaborations with Joan of Arc, etc.) does well to underscore the record’s darker points. From the blood-curdling yells in which the anonymous MC delivers lines about dead cops and human sacrifice, to the positively chilling Charles Manson sample that begins the album, Exmilitary is the real deal, the absolute extent of your parents’ worst nightmares when you came home with your first rap album.