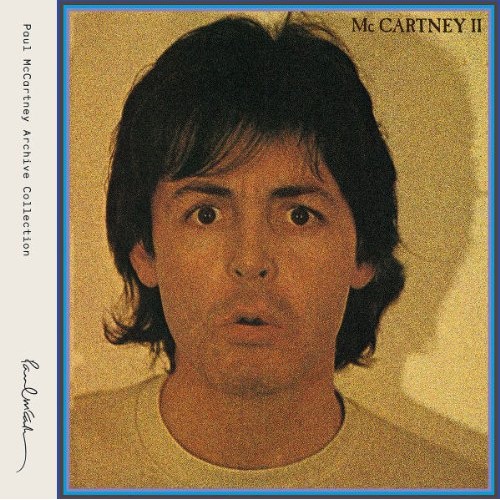 It must have been quite a sight: Sir Paul McCartney, hunched over his Fender Rhodes electric piano, alone on his Scotland farm, crooning the late-night poetry of “Waterfalls”. That trademark voice of his resonating across the dusty-yet-comforting confines, and those vacant late-night synth lines dancing along to the somber electrified piano scales, as the candle flickers in the corner and the hours pass and pass and pass. On record, the melancholic track conjures up these images; Macca sounds so distant, so heartbroken, and so isolated. That’s because he was. Around the time of its inception – circa July of 1979 – the former Beatle had abandoned Wings and holed up on his Scotland farm in Campbeltown, where he tinkered with synths, resulting in 20 recordings that he planned to keep to himself. Of course, he never did, which is why we’re looking at a re-issue of his second solo album, McCartney II.

On first listen, McCartney’s second outing sounds, well, odd. Save for “Coming Up”, which still feels like a Wings track (the dancehall-ready tune debuted originally in Wings’ setlists), the whole of the album meanders between funky Macca jingles or just downright weird experiments. At times, he’s channeling Country Joe McDonald, constructing hickory-smoked road jams like “Nobody Knows”, while other moments he’s pre-dating Jan Hammer, orchestrating mindfuck instrumental suites like “Front Parlour” or “Frozen Jap”. What’s great is that no matter how layered these tracks are – take, the strutting rockabilly of “Bogey Music”, for instance – it always feels like he’s alone. It’s bizarre.

The main problem that still dwells within the album is that some tracks don’t work at all. Nobody needs to hear a song like “Temporary Secretary”. Its needle-like electronic backbone draws up a fine pace, but the repetitive chorus, coupled with Macca’s nasally vocals, makes it one of the most annoying tunes in the legend’s iconic discography. The same goes for “Darkroom”, another quasi-instrumental, though this one sports some vocals, although they hardly do much but chant again … and again … and again. It’s an exercise in sanity, really.

But McCartney doesn’t keep the mad scientist act up. Before the record ends, he’s already hung up the labcoat, opting for an acoustic guitar and some reverb, instead. On closing track, “One Of These Days”, McCartney coos over some delicate strumming, “One of these days, when my feet are on the ground/I’m gonna look around and see,” perhaps alluding to the album’s personal construction. Incredibly intimate and rather comforting in nature, some might say it’s a loose Beatles track, but really it picks up where he left off on 1970’s McCartney.

For the 2011 re-issue, as part of the Paul McCartney Archive Collection, the original remastered record’s been packaged with an assortment of bonus tracks. “Check My Machine” should be noted as being the first track of these Scotland sessions; the banjo funk makes its way on-board, sounding a tad polished and feeling less like a demo and moreover a rough B-side. The previously unreleased entry “Blue Sway” features the Richard Niles Orchestration, and while it certainly never belonged on McCartney II, its sleek sheen does beg for a spin or two. The same goes for other unreleased track “Bogey Wobble”, though this one’s just entertaining to see how “far” Macca went. Who knew the Beatles’ bassist had a knack for writing Nintendo scores?

Outside of that, other material includes a live rendition of “Coming Up”, the holiday single “Wonderful Christmastime”, the Tangerine Dream-esque “Secret Friend” (clocking in at over 10 minutes, no less), and other previously unreleased tunes like “Mr H Atom/You Know I’ll Get You Baby” and “All You Horse Riders/Blue Sway”. They’re all good-to-have tracks if nothing else. But, really, you’ll also recognize why they were shelved for such a long time.

Over 30 years later, McCartney II continues to leave fans confused and bewildered. So much of it seems baffling – even after listening to material made years later under The Fireman, Macca’s eccentric collaboration with Youth. (The two have been dabbling on productions since 1993.) Perhaps it’s because McCartney put all of this together alone, at a time when he was still touring the globe with Wings. Granted, he was on the cusp of the ’80s, a time when synthesizers became everyday dalliances for musicians; however, his use of the machines here feel alien, at least to his style. That’s the real charm of McCartney II, though, it’s the notion that this is a solo album of the strictest means. It’s just a man and his mind. As we know, that mind is something quite unreal, even amidst a few hiccups.