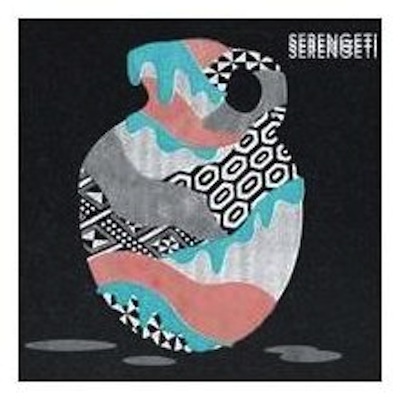 A friend from Chicago once played me Serengeti‘s “Dennehy,” from the 2006 album of the same name. I thought it was a joke, like a Weird Al for hip hop. So I was surprised when I started listening to his debut solo album for Anticon Records, Family & Friends, and heard a country-twanged circular guitar riff and dissonant violin double stops on the opener, “Tracks”. Is this some band playing to hipsters at a Bushwick warehouse? Then Serengeti’s assertive voice begins rapping, free of the affectation or posturing that characterizes so many hip hop styles.

There’s an honesty to his voice, a certain frank bluntness to his tone that is matched by his candid and intelligent lyrics. Rather than romanticizing gangbanging or reveling in the ultra-rich lifestyle, Serengeti’s lyrics focus on the mundane reality of life (“Look at the monster you’re spoonin’/You never really know someone ’til you’re both ruined”) mixed with a twisted dark humor (“I’m harsh, like drowning in a marsh/Or taking a Xanax and drinkin’ some Sparks”).

The grooves on Family & Friends, engineered by Yoni Wolf and Advance Base, bear many hallmarks of indie rock: lo-fi percussion mingles with a funky bass line and staccato guitar picking on “Long Ears”; both “PMDD” and “Ha-Ha” sound like early 80s old-school hip hop beats; “A.R.P.” featured an 8-bit synthesizer channeling the original Final Fantasy spirit. This hybrid, mixing tracks that would be at home on a Sufjan Stevens or Dirty Projectors album with strong hip hop beats, creates a unique sound, showing that Serengeti is carving himself a niche in this overcrowded hip hop market. But it’s his brilliant lyrical stylings that will pull you in and make you want more. Many ring of an almost ironic self-consciousness, instantly relatable to most 20-somethings: “Ever since I lost my job/I started a blog.”