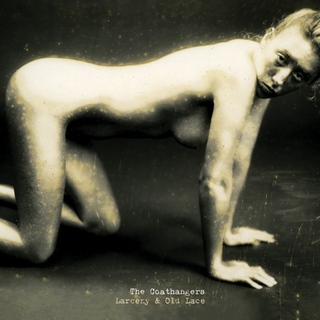 With the noticeable polish of a professional recording studio and improved songwriting, the band’s third album, Larceny & Old Lace, finds The Coathangers at their most mature and varied. We’re hearing a band that’s come a long way from the group of girls who first picked up instruments as an excuse to play parties – we’re hearing musicians whose chops have finally developed enough to live up to all of their promise.

At the best points on their previous albums, The Coathangers sounded like vintage riot grrl rock at its most infectious. This continues here, as parts of Larceny & Old Lace would have found themselves at home on a Kill Rock Stars release circa 1993, at least in sound. “Hurricane” is the first single and sticks closest to the band’s roots. The song’s somersaulting choruses are separated by verses that aren’t so much sung but grunted and snarled. The song is dark and downright menacing; these aren’t exactly The Coathangers we’ve heard before. The band on Larceny & Old Lace is something scarier and more calculatedly sinister. It’s followed up by “Trailer Park Boneyard”, a bit of No Wave that alternates between a danceable rock sound and short bursts of dissonant guitar noise.

“Johnny” is the album’s best song, telling the tale of a boy’s descent to hell for some unspeakable crime. The song’s nasal growls come off like playground taunts. It’s jarring, and whether deliberate or accidental, it’s effective. The best comparison is Romeo Void’s “Never Say Never”, but even that fails to convey this song’s teeming attitude.

Beyond just improving on their familiar sound, The Coathangers use several tracks on their third full-length to step out well beyond their comfort zone, trying on new styles. “Go Away” is a sweet-sounding pop number, picking up light synth hook under sugary vocals that take a cue from ’60s girl groups. Lyrically, however, the song’s far from that mark; rather than one of the syrupy love songs that The Ronettes and similar groups built their careers on, we’re presented with a song about a girl encouraging her boyfriend to cheat on her. Larceny & Old Lace also wears the influence of The Coathangers’ post-punk predecessors, with the stuttered, percussive instrumental rhythms on “Call to Nothing” and “Chicken: 30” taking more cues from Wire and Gang of Four than Bikini Kill. The cold, synthetic sound on “My Baby” cribs a lot from Young Marble Giants. “Tabbacco Rd.” ends the album with a melancholy acoustic piece that proves that behind all of the spitting and howls hides a wonderfully pleasant singing voice.

What The Coathangers continuously do well is come crashing out of the gate and establish a catchy hook as quick as possible, making sure not to get stuck in any one spot long enough to wear out their welcome. No song on Larceny & Old Lace breaks the 3:30 mark, with most ending more than a minute earlier. By taking a few risks that work and doing what they do best – but doing it better – The Coathangers have given us their best album yet.