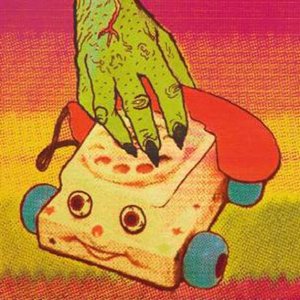 The opening track of Thee Oh Sees‘ new album, Castlemania, ‘”I Need Seed” begins arrestingly, in a clappy, shambolic kind of way, reflecting John Dwyer’s deeply held love for the psychedelic era. At one point, he sings “it don’t feel good to me,” when the converse is obviously true. He has always worked with opposites. Over the last 10 years, Thee Oh Sees have mixed up being experimental with being one of the tightest garage rock bands around.

Castlemania is a very pleasing testament to this, and is also a document to Dwyer’s overwhelming talent, since he plays most of the instruments on the record (helped along here and there by Heidi Alexander and Brigid Dawson). Dwyer reaches heady heights on “Stinking Cloud”, with its use of toy instruments (that begin to sound like a children’s choir), stomping synthesizers, and distorting vocals. “I’m dead, as I already said,” he proffers, and you are inclined to believe him, since it sounds like Hades is giving a children’s party.

The straight-up garage rock on “Corrupted Coffin” and “Pleasure Blimps” is warm and hazy, with glockenspiels, melodic chorus, lots of “la, la, la’s”, sturdy guitars, psychedelic imagery, and a sense of “heck to the corporate world!” Thee Oh Sees are working from a different impulse from so many others, with a freewheeling sense to everything they do also evident in their live shows. They are having a great time and want to bring you along with them.

Something like “Blood on the Deck” expands on that thesis, which is an old-fashioned Beatles-meet-Pretty Things-inspired composition,where you find yourself singing along to a happy melody, only to realize that it’s about something very dark. “Idea for Rubber Dog” quickens the pace further, with mournful guitars leading into the melancholy and delicate instrumental “The Horse Was Lost”, which is a great companion piece for the eerie, glassy, “I Won’t Hurt You”. By cramming 16 songs into just over 40 minutes, Thee Oh Sees are giving you all the musical vitamins you need.