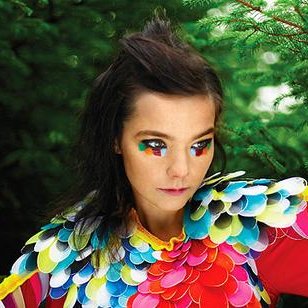 BjÃ¶rk has always been the epitome of creativity in all that she does. Whether through her eye-catching wardrobe choices or her almost entirely a capella album MedÃºlla, she’s continually been at the forefront of the intersection of style, technology, and music since her debut. Continuing her M.O. as an innovator, her latest endeavor, Biophilia, will see the Icelandic songbird adapt the technology of the iPad into a truly sonic experience that pushes the boundaries of what truly makes an album.

BjÃ¶rk’s recently redesigned webpage will serve as a springboard for the all-app album, a first in the music biz. And while the release will see traditional formats, the true innovation lies in the apps themselves. As it’s a massive undertaking, the album will be released as a core app with each of the 10 album tracks individually getting their own app.

Along with the songs, the LP will feature a number of interactive video elements. According to the Guardian, the song “Virus” tells the tale of a battle between a cell and a virus as soundtracked by the beeps, strings, and docile tones of BjÃ¶rk. The album and live presentation will also showcase custom organs created by Icelandic organ crafter BjÃ¶rgvin Tómasson that allow for MIDI integration (thus, according to Tómasson, leading to the creation of a new instrument, the “gameleste”). In fitting with the reinvention a 100-year-old instrument, the notion for the project developed from the dichotomy that modern Iceland strikes in the balance of the organic side of nature and history versus the modern conveniences of technology.

“In Iceland, everything revolves around nature, 24 hours a day,” she told Oor magazine in 1997. “Earthquakes, snowstorms, rain, ice, volcanic eruptions, geysers … very elementary and uncontrollable. But on the other hand, Iceland is incredibly modern; everything is hi-tech.”

With the release schedule and functions of each of the apps, the project allows for more personalized interactions in order to create a unique user experience that will grow and change as features are introduced and expanded. The point of the endeavor, according to interactive artist Scott Snibe, who produced the app, is to integrate the various visual and auditory aspects into one larger experience.

“BjÃ¶rk’s put herself way at the forefront here by saying, ‘We’ll release this album and these apps at the same time and they’re all part of the same story,’ “Snippe said. “The app is an expression of the music, the story and the idea.”

BjÃ¶rk’s vision will come to fruition later this year with a live multimedia showcase taking residence at Campfield Market Hall in Manchester, UK, with the full itinerary below. Biophilia is scheduled to be released sometime in 2011.