Check Out: Kay Kay and His Weathered Underground – “World’s Entire” (CoS Premiere) 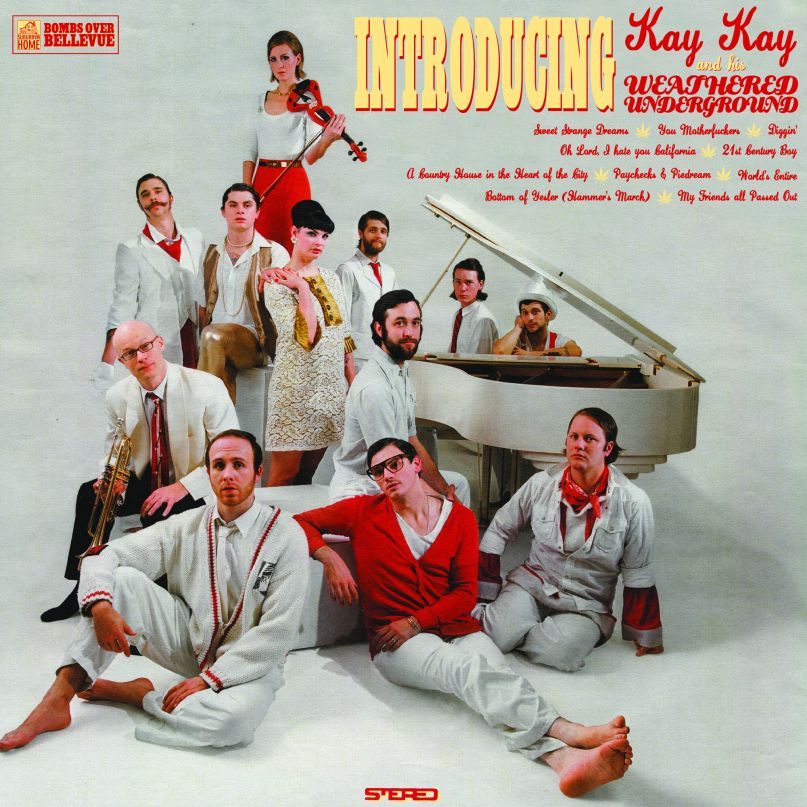 There’s a lot of humanity within the lineup of Kay Kay and His Weathered Underground. In fact, by the looks of the album art for the band’s second LP (which is pictured to the right), the latest incarnation of the Seattle, Wash.-based outfit boasts 12 members. And that makes a lot of sense, since it probably takes a lot of work to get their songs to tape.

The group is a revolving collective of musicians that revolves around two main songwriters – ex-Gatsby’s American Dream members Kirk Huffman and Kyle O’Quin – who enlist the help of their friends to help flesh out intricate, well-orchestrated psych-pop that can easily please fans of catchy hooks and symphonic complexity at the very same time. And while Introducing Kay Kay and His Weathered Underground isn’t Huffman and O’Quin’s first album under the new moniker (their eponymous debut LP actually dropped three years ago), it would certainly serve as a good way to start a sonic relationship with the band.

Written at a time when Huffman was simultaneously celebrating the birth of his son and mourning the loss of his longtime producer and mentor, Tom Pfaeffle, Introducing’s ten tracks are “filled with tales of bohemian urban discontent” that explore themes more existential than the ones examined on their 2008 debut LP. The band has reigned in the often-sprawling nature of their previous work and traded it in for tracks that stay more in line with traditional 3-4 minute song structure, and the boys have been kind enough to offer our readers an exclusive preview of an album cut.

Streaming below is Introducing’s eighth track, “World’s Entire”, which opens with breathy vocals and what sounds like a pulsating Wurlitzer before it breaks out into a string-laden, harmony-drenched lament on summer love. One listen makes it hard not to believe that Kay Kay and The Beach Boys would’ve been BFF if they both existed in the same era, and the good news is that interested parties will get a chance to see it all as the band is currently on tour with The Dear Hunter.

Below, you can find the mp3, the album’s tracklist, and a complete list of the band’s upcoming tour dates. The album doesn’t drop until July 26th (via Suburban Home Records), but preorders for Introducing Kay Kay and His Weathered Underground can be had here.

Introducing Kay Kay and His Weathered Underground Tracklist:
01. Sweet Strange Dreams
02. You Motherfuckers
03. Diggin’
04. Oh Lord, I Hate You California
05. 21st Century Boy
06. A Country House In The Heart Of The City
07. Paychecks and Pipe Dreams
08. World’s Entire
09. Bottom of Yesler (Hammer’s March)
10. My Friends All Passed Out