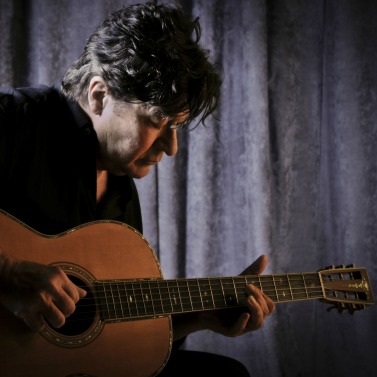 On How to Become Clairvoyant, Robbie Robertson‘s first studio album in over a decade, the legendary guitarist turns his third person street narratives inward, opting for atmospheric confessions on relationships soured by the road, tumultuous rock culture in the 70’s, and, of course, the legacy and ultimate demise of The Band. It’s his most personal record to date, and while phoning from his Los Angeles home, he was eager to discuss the unique recording process and box set (brimming with bonus tracks, original artwork, tarot cards, and much more), as well as the cathartic process of songwriting.

You’ve done box sets before with The Band, but this is the first time you’ve done something of this magnitude as far as a collector’s set is concerned, right?

I’ve done a few box set things. But I’ve never seen a combination of music and art come together like this before. Making this record was an extraordinary experience, one of the greatest musical experiences I’ve ever had. And it wasn’t because I had a big brainstorm idea or anything. It was because pieces kept coming together. When I was finishing up the record, this artist I know–Richard Prince–I was in New York, and he said to me, “If you’d be into it, could you send me some of the music you’re working on? Because if it’s okay with you, I’d like to do some artwork for it.” So, I thought, well that’s a nice gesture. I don’t know what you have in mind. I don’t know how I would use it. I didn’t know any of those things. But my friend Larry Bogosian–he’s probably the biggest modern art dealer in the world–he says, “You know, Richard Prince gets between six and seven million dollars for each piece of work he does. Take him up on that.”

Get some bang for your buck.

Yeah. It was just a nice gesture, but I didn’t know where this was going. Then my friend Anton Corbijn–who’s one of the greatest photographers in the world–he had some ideas for this package as well. And he takes photographs that tell stories. And he took a picture of me reading this magazine called Becoming Clairvoyant. And it kind of set off a thing where he did a series of photographs. Then Richard Prince sends me some stuff that he’s done, and it’s fantastic. And he ends up doing five pieces of art for this. And then on top of all that, this other guy that I know, Ricky Jay…

Yeah, I’ve seen him in a bunch of movies from P.T. Anderson. He’s a magician, right?

He’s one of the greatest magicians ever. If you’ve ever seen his magic act, it’s not some silly Las Vegas shit of sawing a woman in half. It’s mind-boggling stuff. So, Ricky says to me, “Can I hear some music?” Because he knows I was calling this How to Become Clairvoyant. So, he says to me, “Listen, I have maybe the best magic artwork archives there are. And if you want it, I have this amazing clairvoyant artwork that I’d like to contribute to the package.” So, I can’t fit all this stuff on CD, right? So, I’m thinking jeez, this is telling me something, especially based on all these bonus tracks I have and everything. And these bonus tracks aren’t just alternative versions, they’re a journey inside the music on this record. It’s Eric Clapton and I sitting across from each other with a couple of guitars, actually writing stuff on the spot. So, all of these things are adding up and adding up, and I said we have to put together a collection. You can’t just say, “Well, guys, thanks anyway.” You’ve got to do something about it.

So, we put this package together, and it’s got lithographs of Richard Prince’s work. It’s got original tarot cards. It’s got a DVD where you can make your own mixes of the song. It’s got clear vinyl for people that are real audiophiles. On black vinyl, you can cheat. On clear vinyl, you can’t cheat. So, it’s like paying respect to people that are that sensitive and care that much about the music. So, I decided I need to sign these things and number them. But I could only sign 2,500. That’s a lot of signing. But I am so proud of this package. I am so proud of this collection. This is the new model. This is something that years ago we could never have done. That feeling of when you could open up an LP and look at all these pictures… this is just a complete, beautiful exaggeration of that experience. It’s something where I worked on every detail in this thing. Because these people were so generous in what they were giving to my music and giving to me, that I had to treat it with the utmost respect.

The songwriting on this album seems to be more internal, more confessional, where as your older stuff tends to be  in these third person stories. Was there anything that happened that made the songwriting as reflective as it is, or is that just the spot you’re at in your life right now?

I could’ve called this record Here’s What Happened. You know what I mean? It was really me just reflecting on periods of time in a manner that I’ve never done before. Songs that I’ve written in the past… there’s always a personal element to it. You can’t get around that. But I’ve always tried to take the position of more of just the storyteller. But in this case, something happened. A gate opened–almost a sense of release. It opened a gate, and now I’m going to write an autobiography.

I heard that through the grapevine. So, that’s something you’re definitely doing, then?

Yes, I am going to do that in about four or five weeks. I’m going to roll up my sleeves and start… I’ve got a lot of stories to tell, so I’m going to start writing them down.

Will it be about your whole life or specifically your time in The Band, your solo career, or a little bit of everything?

Well, there are a lot of stories behind the stories. I’ve just had an amazing journey, and it started when I was very young. Right now, I’m very excited about the idea of telling the whole story. So, we’ll see how it goes. But it’ll incorporate my time with Martin Scorsese, with The Band, with Bob, with everybody.

I don’t know if this was intentional or not, but the second track on the album, “When the Night Was Young”, to me, it has a similar musical feel as “The Weight”… in the chord structure and just the general sound. In the song, you talk a lot about that time period. Was that something that was intentional, or was it just a happy accident?

It was part of the reflective process. But I didn’t know it was happening when it was happening. It was very subconscious to me. I didn’t recognize any of the things you’re saying until after the fact. And I like that. Because, for me, it meant that I didn’t get caught up in something, and it wasn’t contrived in any way.

Yeah, the whole album has this very cohesive nature about it, but at the same time doesn’t feel like a concept album. Do you have a song on the album that you would consider the most personal to you?

I don’t know if there’s one that stands out. Every song, in its own way, is sort of personal. Once I started going down that path, it felt good to follow that path. So, there is nothing on here that is more or less than the others.

So much of the album talks about your entire musical career. Has anyone who was around during that time period listened to the album? Whether it’s Garth Hudson or Levon Helm or I guess Eric Clapton because he played on it. Have the people who shared those experiences with you listened to the album, and if so, did they have any specific reactions to it?

No one has talked about it to me in that kind of way except Eric Clapton. I went to London, and I recorded a bunch of these things with Eric and Steve Winwood. We were just cutting all the basic tracks. And some of them I had some words for and some ideas for. But it wasn’t fleshed out or anything at all. So, when I came back from England, I had to go off on another project I was committed to–the music for this film Shutter Island with Martin Scorsese. And I took a complete departure from making this record and just left it in the dust really. Because this movie turned out to be a very lengthy process, and when I came back to working on the record, it was like a clarity, like a fresh air blowing over me. And that was when I completed ideas. That’s when I finished the lyrics. That’s when I finished the music. And that’s when I pulled in these other people. Because they were perfect casting for what I had in mind. And when I played the record then for Eric Clapton, he was like, “Holy fuck, I had no idea what you were doing.” And at that point, I felt like my mission is already complete. Everything from there on out was a bonus.

You’re talking about this feeling of clarity. Writing these lyrics, was it cathartic in any way? Did it help you put any past demons to rest, or are you far enough removed to look at it retrospectively? Was it emotional for you?

It was very emotional for me. A lot of the time, the process of writing songs… most of the time for me, I’ll start writing, and I’ll have no idea where I’m going with it. And I like that. I like the idea of following wherever the inspiration is leading me. And if I was writing these ideas, there was something rising to the surface in all of these songs. And, as I said before, it was almost a certain kind of release. I feel better about all of these situations because I’ve now found a way to share them. I’ve found a way to write about these things and kind of take them out of a dark place and bring them out into the light.