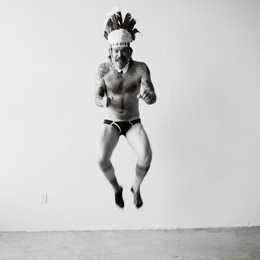 After spending the last decade as the frontman of Eagles of Death Metal, Jesse Hughes is ready to make his solo debut. Under the moniker Boots Electric, Hughes will release Honkey Kong on September 20th via Dangerbird Records.

The record, which has been in the works since 2009, was produced by Tony Hoffer (Beck, Depeche Mode, The Kooks) and co-written with legendary keyboardist Money Mark, best known for his many collaborations with the Beastie Boys. Unfortunately, an issued press release gives no indication that Hughes’ dream of having Dr. Dre and Andre 3000 on the record came to fruition.

Below, you can stream an early taste in the form of the “Boots Electric Theme”, featuring The Distillers’ Brody Dalle. (Fun fact: Dalle is also the wife of Hughes’ Eagles of Death Metal band mate, Josh Homme.)