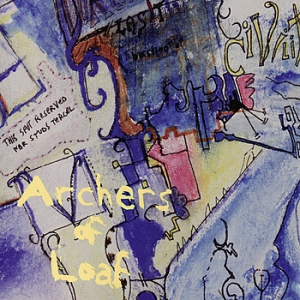 History is important. It shows us where things come from, and lets us trace how they got to be the way they are today. When it comes to music, history is especially important, as every moment can be drawn back, contextualized to every release before it. For indie music, one of the important milestones comes in the form of Archers of Loaf, a rock band who came together in 1990 and broke up in 1998. Despite only less than a decade of existence (until they recently reunited), the band’s energetic sound and bizarre attitude paved the way for acts ranging from indie mainstays Modest Mouse to current darlings Yuck.

Archers of Loaf’s most important creation, at least in terms of being the most definitive signpost for other acts, is their 1993 debut, Icky Mettle. Despite the sound of the album being epitomized by the popularity of “Web in Front”, the band’s first outing is so much more than that. That track’s a starting point, and as the lyrics proudly declare, “there’s a chance that things’ll get weird… Yeah, that’s a possibility.” The appearance of weirdness is more easily seen as a definite, but it’s all a joyous, chaotic journey nonetheless.

In interviews about the album, frontman Eric Bachmann has said that the disc, recorded and mixed in just a week, makes him cringe. However, one can see its popularity arising from the raw energy the band unleashed. The record does have that decidedly balls-to-the-wall feel, all without coming on overly strong to the point of being annoying. There’s a kind of consistency throughout the record, a baseline feel of four dudes plugging in and powering through, with every bit of ferocity, absurdness, and awkward tendency they could muster. But the album is hardly a one-note effort, displaying that energy in a myriad of ways.

For one, the musicians are smart enough to continue to give listeners who came to the album through “Web in Front” what they want with “Plumb Line”. Here, that same standard indie rock kookiness is loud and clear. However, the structure is slightly more involved, with tiny sonic nuances and flourishes thrown in to keep it a separate entity while still drawing a clear enough line to point fans hungry for more in the right direction. The same goes for “Slow Worm”, which is way more burned out and heavy-sounding. But, as thorough as they are, the album has plenty of moments of experimentation. “Hate Paste” is a quirky, country-fried moment of twang, doing its best to kick the indie sound in the butt, making it sound as if it were made for some angry, emotional hoedown. Then, just a couple of songs later, a track like “Sick File”, overflowing with raging, lightning-quick punk noise, sounds just as powerful and appealing.

But, as crushing as those moments are, they feel small and singular compared to some of the more involved moments on the 13-track LP. Perhaps unlike other bands they were considered to be contemporaries with, say Pavement or Superchunk, Archers of Loaf added more complexity to their songs. That complexity first manifests in a subtle, impactful way with “You and Me” and “Might”. The first cut is a slow, almost sullen number filled with an airy, ambivalent driving rock sound. Then, as it ends almost silently, the ferocious kick of “Might” stirs the listener back into an aggressive state. It’s an emotionally draining culmination, but never has being lulled felt so good. Simple album arrangement aside, “Toast” is the kind of thing you didn’t get enough of from early indie rock: quiet, brilliantly paced, instrumental creations that build and build into an eccentric moment of rock revelry.

Of course, no reissue is complete without the subsequent bonus material. In the case of Icky Mettle, it’s an entire second LP of early B-sides and the entire Archers of Loaf vs. The Greatest of All Time EP. For the most part, the extra disc is a lot of the same material (noisy, unpolished hints of what was to come from the band) from the album, but a lot of it is derivative, thanks to the generally homogeneous nature of the extras. There are, however, a few exceptions. For instance, the odd, borderline experimental soundscape of “Audiowhore”, the minimalist, damaged blues of “South Carolina”, the quasi-Britpop guitars adding spice to “Tatyana”, and more of that mainstream-friendly gold of “Web in Front” in a grungier vibe with “Freezing Point” all add something to the band’s history. If anything, the extras better inform the choices eventually made on the band’s debut, highlighting just how great a record it turned out to be (since, basically, they’d been doing it from song one).

Put simply, Icky Mettle is a gem of early ’90s rock worthy of a place in the indie Smithsonian.