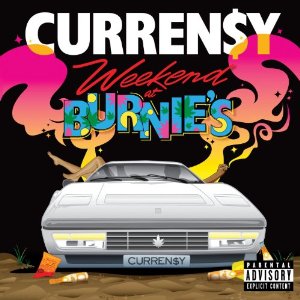 You’d be hard pressed to find a rapper, or any musician, really, who doesn’t like weed. You’d also be hard pressed to find one who likes weed more than New Orleans rapper Curren$y. Flying directly in the face of most pothead clichés, he is also one of the more prolific rappers working today. After years of mixtapes, and features galore, Curren$y finally released his debut album, This Ain’t No Mixtape, in 2009. Since then, he’s released six studio albums (two each year), and may still have another one on the way later this year.

Curren$y does his listeners a favor by letting them know what they’re getting into with his latest LP, Weekend at Burnie’s, from the album’s title and cover. The car on the cover has a pot leaf on the grill, Cheetos and bubbly are littered about, and stylized smoke pours out of the windows. If that’s not the cover of a stoner album, I don’t know what is. To top it off, the title is an obvious homage to Weekend at Bernie’s, the classic 80’s corpse comedy, complete with the film’s original font being used on the album cover as well. The actual content of the album is just what you’d expect from Curren$y: solid beats and great rhymes.

While some that prefer their hip-hop to be more socially conscious may not be fond of Curren$y’s lyrical content, even they could not deny that he spits with the best of them. His flow is not particularly fast, and he isn’t a master of wordplay, but his power is undeniable. He’s a frontrunner for the rapper of the Twitter age,  as evidenced by album opener “#jetsgo”. So far, he’s kept a high quality to go along with the high volume of his releases, and Weekend at Burnie’s is no exception. It won’t be his breakout into the mainstream, but if he continues at this rate he’ll be there soon enough.