Portugal. The Man  In the Mountain, In the Cloud 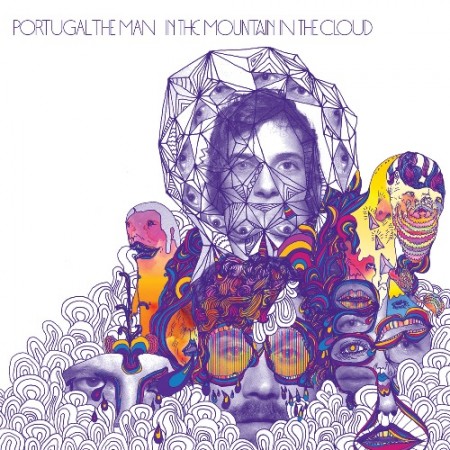 Since their often-overlooked 2009 psychedelic pop hallmark The Satanic Satanist (and its even better half and all-acoustic counterpart The Majestic Majesty), Portland-via-Wasilla, Alaska, outfit Portugal. The Man have seemingly been caught in a bit of a whirl, unsure of whether to pursue their verse/chorus/verse tendencies in Satanic’s vein or go for a more extended, experimental take on their sound, while nearly completely ignoring the sprawling awesomeness of their stellar, jam-prone live sets on record.

In the Mountain, In the Cloud, their first full-length with Atlantic Records, sees Portugal. The Man reprise the sort of vaguely insurrectionist hippie jams they’ve cranked out over the years on such memorable tracks as “The Woods” and “60 Years”. Rather than retread the same ground, though, the band kick right into “Got It All”, which opens on a lick as tasty as any they’ve cut throughout their career, John Gourley howling about “the revolution” with brazen relish. While there are points here where tracks overstay their welcome, such as the plodding midsection of “Everything You See” or the spacey “You Carried Us”, the highlights here are slabs of psychedelic rock gold, capturing the band at their best.

Signing with Atlantic has no doubt afforded Portugal. The Man new luxuries, perhaps audible in the sampled drum loop that kicks off “Got It All” or the guttural vocal part and ominous synths (shouts out to Fever Ray?) that permeate album highlight “All Your Light”. Production duties were handled by John Hill and frequent collaborator Casey Bates, the former of whose recent credits include M.I.A. and Shakira’s latest albums. Hill’s influence can be heard intermittently in the way Portugal. The Man have expanded their palette far beyond the jam-prone, prog-rawk they made their name on back on Church Mouth and Waiter: “You Vultures!”.

Even so, it goes without saying that In the Mountain, In the Cloud sounds a bit rushed. On their sixth album in as many years (not including the all-acoustic The Majestic Majesty and a handful of EPs), often the band sounds like an abbreviated version of themselves. Once you’ve heard it, it’s nearly impossible to listen to the band without harking back to The Satanic Satanist, a record on which Portugal. The Man sounded perfectly capable balancing their disparate influences and tendencies, shifting from the anti-war hippie jam of “People Say” to the funky wah-wah/tabla driven “Lovers in Love” with practiced, fleet-footed ease. Satanist‘s songs felt just as long as they had to, with nary a solo, bridge, or verse overstaying its welcome, while the album’s longer tracks wasted no time with tricky instrumental passages or interludes. On this album, though, the tracks that are lacking in length often sound as if they–well–are lacking in something else as well. Not to say In the Mountain is a poor effort; it merely seems like it would benefit from a bit more development.

What’s strangest about Portugal. The Man is that they offer the complete package, and yet how readily they’ve under-delivered on their past couple of records. John Gourley’s piercing falsetto and penchant for memorable guitar hooks along with the band’s virtuosic talent and ability to churn out unforgettable choruses have the words “T. Rex reincarnate” written all over them. Their live sets–which often include memorable covers of songs as diverse as a medley of the glam-classic “Moonage Daydream” and MGMT’s “Weekend Wars” to Motown hits–find the quartet fleshing their songs out into extended jams, most notably on four-minute fan favorite “AKA M80 the Wolf”, which regularly stretches past the 10-minute mark when played live. On record, however, it’s rare that the band extends past four or five minutes, and even when they do, all too often the tracks play like inferior, minimized takes on themselves. On In the Mountain‘s strongest track, though, sprawling album closer “Sleep Forever”, Portugal. The Man take the track to its limit, repeating its fervent chorus higher and louder over punchy licks and pounding drums, all the way to its crashing finale.