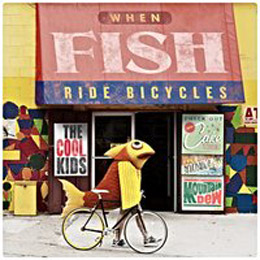 It seems rather frivolous to call When Fish Ride Bicycles the debut LP for Chicago/Detroit rappers, The Cool Kids. After all, it’s been three years since the release of The Bake Sale, the EP that started it all, and since then the group has unleashed a handful of mixtapes and singles. It just doesn’t seem right. But, in one sense, the Cool Kids are debuting a new sound. They still produce their own beats, and rap old-school about girls, cars, and how expensive plane tickets are, but collaborating with Pharrell, Bun B, Ghostface, and more soulful vocalists like Mayer Hawthorne and the Cool Kids’ own C.A.K.E. label signee Tennille audibly shows a new side to the group. Elements of Southern rap, crunk, and R&B saturate the album and elevate the Cool Kids from their oft-debated status as early ‘90s hip hop revivalists to versatile producers on par with their idols the Neptunes and RZA.

The beginning of the album only slightly deviates from the Cool Kids that listeners already know, the sound suited to its July release with lazy arrangements and constant references to summer. Opener “Rush Hour Traffic” buries the xylophones from Run DMC’s “Peter Piper” beneath booming 808’s and looped vocal samples. The chorus’ terse guitars and matching synth riffs add non-traditional details that sound like Ratatat already got its fingers into new remix material. “GMC” and “Bundle Up” could have come straight off The Bake Sale, with heavy, crunchy beats and minimal effects like reverb and slurping bass, respectively, backing the Cool Kids’ “lines so cold every word is frost-bitten.” Middle track “Boomin’”, a slinky bedroom jam, fleshes out standard-issue handclaps with—what else?—intimidating synthesizers and Tennille, whose sweet voice perfectly accompanies the rhythm from Next’s “Too Close”. Ode to Miami hedonism “Summer Jam”, punctuated by a vocal clip that sounds exactly like a bossa nova saxophone, features female vocalist Maxine Ashely, and bears Pharrell’s production credit.

The Neptunes also appear in their signature nasally synthesizers and sharp intakes of break on “Get Right”, sounds that defined N.E.R.D.’s debut In Search Of…. That sinister crunk vibe continues on “Sour Apples”. Drummer Travis Barker’s vicious drum line drives lyrics like “And this is where it gets retarded/She wanted me to beg/But I beg your pardon?/I’m Park Place, you’re Marvin Gardens.” Using Monopoly terms to talk about how dope they are is vintage Cool Kids. It’s the erudite equivalent of Kanye West’s famous “Why the hell would you front on me? There’s a thousand you’s, there’s only one of me”, and is just one reason why Mikey Rocks is becoming (if he’s not already) one of contemporary hip hop’s most creative lyricists.

“Penny Hardaway” gets help from Ghostface. In the languid beat and intermittent orchestration, you can hear how the track reminded RZA, who visited the Kids at their Chicago recording studio, of the Wu-Tang Forever-era Clan. When Rocks coyly self-references a lyric he lifted from Nas on The Bake Sale, he pays homage to their beginning, but also reminds the listener of how far they’ve come. Single “Swimsuits” exemplifies how the Cool Kids have diversified, featuring the crackly beat from Public Enemy’s “Fight the Power” set against Detroit soul singer Mayer Hawthorne’s silky falsetto on the chorus.

Some could argue that the Cool Kids abandoned their original minimalism on When Fish Ride Bicycles. However, they’ve contemporized their old-school influences for a wider audience. By incorporating both well-known names and lesser-known artists, the Cool Kids are finally in a position to get major exposure. On “Roll Call”, for example, one of the track’s contributors, Detroit rapper Boldy James, first appeared on Cool Kids mixtapes Gone Fishing and Tacklebox. Newer listeners might not recognize his name, but they would certainly respond to other guest artist Asher “I Love College” Roth. In this way, the Cool Kids become tastemakers. Whether they’ll achieve the same status and recognition as N.E.R.D. or Wu-Tang will only be determined with time and more albums, but they are definitely on their way. Even though the wait was worth it, let’s hope the Cool Kids don’t wait another three years to put out their second full-length.